The architect with an Irish soul reshaping US cities

Lorcan O’Herlihy on rebuilding Detroit, the Los Angeles housing crisis and designing with climate in mind 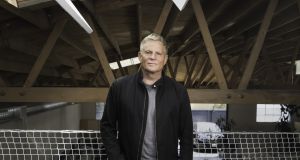 Not too many people would know that Hollywood movie star Dan O’Herlihy was a qualified architect, having taken up acting after getting small roles to play in the Abbey Theatre while he was a student at UCD. He never practised architecture, so it’s fitting that his son Lorcan took up the baton years later and his practice has since gone on to win numerous awards as well as a 2018 ranking by Architect magazine as No 1 design firm in the US.

Based in Los Angeles, Lorcan O’Herlihy Architects (Loha) champions the idea that architecture is “a social act – a tool for engaging in politics, economics, aesthetics and smart growth”, with eclectic projects that range from distinctive bus shelters to supportive housing for homeless people. “As global cities become denser and the need for housing greater, it is more critical than ever to design spaces that promote equity, human interaction and cultural evolution.”

The diverse work of the firm is recognised internationally and includes art galleries, large-scale neighbourhood plans, mixed-use schemes, affordable homes, student housing complexes and even a small African bead museum to help regenerate a run-down part of Detroit. Each project by Loha reinforces its founder’s firm belief that “artistry and provocative design are key to building a vibrant, social space to elevate the human condition via the built environment”.

O’Herlihy will deliver a keynote address to the Royal Institute of the Architects of Ireland’s (RIAI) annual conference in Dublin this weekend and he believes the invitation relates directly to his architectural preoccupations as well as the recognition he has achieved for Loha’s work. He’s also no stranger to Ireland, having lived here in the mid-1970s – even doing his Inter Cert at Sandford Park School, when Dublin was a different place entirely.

Living in Killiney and getting chauffeur-driven to the school in Ranelagh every weekday, what he remembers most about the city then was being “worried about bootboys and skinheads”. Now, along with his wife Cornelia (who’s from Dublin) and their 10-year-old twin boys, Daire and Darcy, he travels to Ireland twice a year to stay with her brother in Co Sligo. “I feel very comfortable in Ireland. Although I sound American, my soul is Irish,” he says.

O’Herlihy, who’s now 60, traces his interest in architecture to his teenage years travelling with his father (and mother) while he was making movies, and was actually admitted to California State University to study it at the age of 16. There was no problem finding a summer job either, as his dad had been in Kevin Roche’s class at UCD and wrote to Ireland’s most garlanded expatriate architect to ask him if young Lorcan could work in his office.

Roche had just won the Pritzker Prize for Architecture in 1982, so it was an exciting time to be a junior player on his team in Hamden, Connecticut, working on such projects as the Temple of Dendur pavilion at New York’s Metropolitan Museum of Art. Later, after working for IM Pei while he was designing his pyramid for the Louvre in Paris, O’Herlihy took up painting in Tribeca – long before it became unaffordable for artists – and “had the time of my life”.

He returned to architecture, doing a master’s degree at the Architectural Association in London, before setting up his own practice in 1994. “For me, it’s not about designing isolated objects, but how to create better cities,” he says. And though based in Los Angeles, he’s also been working in Detroit, which had almost become a failed city due to “white flight” and America’s car culture, with acres of vacant land and eight-lane traffic arteries with no footpaths.

Loha has been working with billionaire Dan Gilbert and his Bedrock investment company, which has cashed in on tax incentives for urban renewal in Detroit, but it is also involved in neighbourhood renewal schemes and small-scale urban infill projects. The city has “a lot of emptiness, so there are plots available where we try to create architecture by engaging with the sidewalk and taking advantage of public transit so the area becomes more walkable”.

O’Herlihy applies the same thinking even to Los Angeles, that sprawling conurbation designed around its “freeways”. Loha’s office is located next to the new Expo light rail line that runs from downtown to Santa Monica, and half of its 30 or so employees “take transit or ride a bike” to work. Given the global context of climate change, he believes that “smart growth is something that has to be done” and architecture “has to be rethought in how to handle it”.

His own house near the Pacific Ocean had to be designed to take climate change on board. And when Loha is working in Florida, its design teams have to look at buffer zones and permeable surfaces to protect against rising sea levels. So whatever about US president Donald Trump’s persistent denials, O’Herlihy believes that “all of us as architects have to take it on. We cannot not deal with it. If you do, you’re ignoring the most significant crisis that’s going to happen.”

He feels “very fortunate to be working with like-minded people, provoking conversations about the nature of city life” and how to make it better, even for homeless people on Skid Row in Los Angeles by upgrading facilities at the century-old Midnight Mission or, at the other end of the social scale, designing new seating areas to “enhance the character” of exclusive Rodeo Drive in Beverly Hills. Or, indeed, the new bus shelters in Santa Monica, with the disc-like canopies.

O’Herlihy is also interested in working in Ireland and formed a partnership with Dublin-based Denis Byrne Architects to design student housing at Grangegorman, although the project was cancelled in favour of a competition among developers. The only building he ever designed here was a very stylish modernist mews house on Pembroke Lane, in Ballsbridge, built about six years ago. He’s also a “great admirer” of Grafton Architects and O’Donnell+Tuomey.

He is dubious about American pop sociologist Richard Florida’s idea that cities worldwide must be redesigned to cater for the “creative class”. Instead, the focus should be on treating cities as “living organisms”, based on “bottom-up strategies, with people taking over spaces and creating pop-up recreational areas, such as skateboard parks”, recognising the need for “balance between the indigenous people and those who may come [to live in an area]”.

Housing affordability is a major issue for O’Herlihy.

“It’s a real problem in Los Angeles, just as it is in Ireland,” he says.

“Nobody can afford to buy anything, even in their 30s and 40s. We even have married couples sharing houses with other married couples, it’s that bad. So we’re exploring ideas about modular pre-fab housing and how to build more efficiently, bringing social equity to our buildings, and that’s what I’ll be talking about at the RIAI conference.”

I’m sure that his father, the architect manque who died at home in Malibu in 2005, would be very proud of him.

Laura Veirs: ‘I had a feminist awakening’
8

The Abstainer: Gripping tale of violence, betrayal and vice
9