Art in Focus – The Drenched Forest by Cecilia Danell 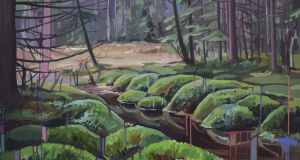 The Drenched Forest is a 2018 painting by Cecilia Danell.

The Drenched Forest is from a body of work rooted in the landscape around her family farm in Sweden. She documents her walks in maps, photographs and notes. Although all of this material, plus memory, informs her painting, once the process of using oil paint in the studio begins, she finds the experience of the process just as relevant to the work she is making. Her images are representational and direct, straightforward accounts of what is there, not photographic and perhaps slightly simplified for the sake of graphic clarity – and to underline that we are looking at something fabricated.

Danell’s exhibition, In a Landscape, is at the RHA Ashford Gallery, Ely Place, Dublin, until April 22nd (rhagallery.ie)

It is typical, though Danell is an artist of considerable range and has worked very effectively in sculptural installation and film as well. Born in Sweden, she is now based in Galway. Through the course of several exhibitions, including The Last Wilderness at the Galway Arts Centre and Winter Wanderer at the Kevin Kavanagh Gallery, Dublin, she has been recurrently drawn to ideas of wilderness and authenticity. Referring to the common human impulse to get back to nature, to live in tune with nature in a prelapsarian state – an impulse that she shares – her work implies that such desires may be problematic.

“I want to wrap myself in this place; I want it to envelop me so that I can feel safe,” she wrote in her journal late last year. Sadly, he father died last year and losing him has heightened her awareness of her connection to the landscape of her childhood and family life. Her title is taken from John Cage’s enigmatic composition, a beautiful, meditative piece with an ambient, gentle texture. It feels curiously suspended in time.

Her paintings embody an awareness that the environment she loves, and that is in many respects imbued with nature, is also unnatural. It is the opposite of the sublime vistas in the work of Romantic painters such as Caspar David Friedrich: a functional, managed, agricultural landscape, devoid of drama, with forestry plantations rather than primeval woodland. Anomalies and discrepancies in the representational fabric of the paintings indicate that all is not as it seems: elements of the environment appear to be melting, liquefying, and there are flashes of incongruously synthetic colour. Memorably, she constructed a cut-out plywood forest as part of her Last Wilderness show, which also included a film centred on footage of small provincial theatres in Sweden. Overall, the implication seemed to be that we cling to theatricalised versions of the world around us, and of the past. However the work, which stemmed from an artist residency in Norway, also allows wider readings. For example, one could reasonably infer in Danell’s paintings and other projects a suggestion that the natural environment is being undone and coming apart.