Doyle has been called the saviour of street photography, and it’s not hard to see why 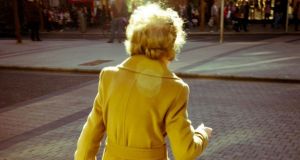 i Series 07 by Eamonn Doyle

What is it?
i Series 07 is a colour photograph by Eamonn Doyle.

How was it done?
The i Series is a set of Dublin street photographs, self-published as a photobook to a very high standard in 2014 (designed by Niall Sweeney). The series is based an inner-city area around Parnell Street that has strong family connections for him. Essentially he was trailing his subjects, usually older people, as they negotiated their daily routines, generally on Monday mornings, often close to his own front door. They are pictured mostly from behind, from a high viewpoint, intent on what they are doing. If that sounds slightly sinister, the images are not: the individuals are self-absorbed and quite comfortable in their environment. Also, one feels they are not just randomly encountered. Each has a distinctively old-school inner-city Dublin quality.

Where can I see it?
Eamonn Doyle, an exhibition at the RHA Dublin, is a collaboration between the RHA and St Patrick’s Festival, plus the Foundación Mapfre (Gallagher Gallery, RHA, Ely Place, Dublin until April 22nd, rhagallery.ie). The show will travel to Foundación Mapfre, Madrid, in September.

Is it a typical work by the artist?
Yes and no. Doyle has published three photobooks on Dublin – his Dublin trilogy, i, On and End. The Beckettian intimation is no accident. The title i came from Beckett’s Not I.

So there are many Dublin photographs. On the other hand, he had spent the best part of 20 years not taking photographs after his diploma in photography at DLIADT, during which time be became well known for his musical activities in Dublin’s club culture, including running an independent techno label and organising the annual Dublin Electronic Arts Festival. He was reputedly a bit weary of the music scene – vinyl, which has seen something of a comeback, was being edged out at the time – when he turned to photography again, around 2008. But this time his approach to images was musical, as he tuned in to the movement of people through the city.

He printed 750 copies of i, and sent one to Martin Parr. A wise impulse. Parr has a huge following and breathes street photography: i was, he said “the best street photo book in a decade”. Michael Hoppen signed him for his London gallery. Doyle had arrived. Where for i he snapped people from behind and above, in colour, On opts for a low viewpoint in black-and-white street scenes, and the work has a slightly more ominous edge. End continues the development, overlaying design material by Sweeney, to some extent fracturing the habitual coherence of the photographic image, and a vinyl record by Donohoe. All three volumes are gathered in a new Thames & Hudson publication, Made in Dublin. That follows on an acclaimed exhibition of the three bodies of work at the prestigious Rencontres d’Arles photo festival, with a soundtrack by David Donohoe and graphic work by Sweeney.