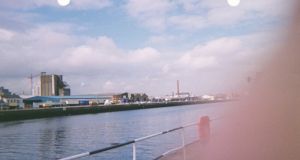 From Made Ground, Green on Red Gallery

Made Ground: Eva Richardson McCrea, Frank Sweeney and the Dublin Docklands Preservation Society
Green on Red Gallery, Park Lane, Spencer Dock, Dublin, Until March 18th (greenonredgallery.com)
The DDWPS is devoted to preserving the history of the Dublin docks and has so far amassed more than 6,000 photographs plus other documentary material. This collaborative two-channel video work uses photographs, interviews, original footage and other source material in tracing the transition “from manual to knowledge-based forms of labour in the Docklands,” and its architectural and communal ramifications.

Transgress: Ian Wieczorek
Ballina Arts Centre, Barrett St, Ballina, Co Mayo, Until May 3rd (ballinaaartscentre.com)
Painting, video, prints plus other elements are employed by Ian Wieczorek in a consideration of borders, with reference to their current, various, troubling relevance and the entire idea underlying them, whereby barriers generally exhibit some level of porosity. Wieczorek sources imagery widely and interrogates the role and uses of the image.

Michael Coleman
Kevin Kavanagh Gallery, Chancery Lane, Dublin, Until April 6th (kevinkavanaghgallery.ie)
A Michael Coleman exhibition is always worth paying attention to. It’s true that you can never be sure what to expect – he is an artist who embodies Arthur Quiller-Couch’s much quoted advice to writers: murder your darlings. Coleman, one feels, is acutely suspicious of his own work. He won’t let himself away with anything. Which is exactly why it’s worth seeing what he regards as worth showing.

Field Notes from the Border #1: Anthony Haughey, Raymond B Newman and Kate Nolan
Gallery of Photography, Meeting House Square, Temple Bar, Dublin, Until April 7th (galleryofphotography.ie)
The first in a series of cross border projects organised in response to the anxieties generated by Brexit. It features a group of new video works, photographs and texts reflecting on the notionally seamless Border in the light of WT Mitchell’s observation that we view landscape in terms of “human interventions, inter-subjective relations and ideologies”. New work from Nolan’s Lacuna, Newman’s study of the Grand Orange Lodge, plus new photographs by Haughey and his short collaborative film, Sanctuary.