Blank pages, black books and a Ulysses that’s hard to get in to 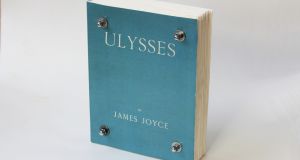 It’s All About Books: Marie Hanlon

Cregan Library, DCU St Patrick’s Campus, Dublin. Until March 15th (with free Thursday Talks March 7th and 14th) dublincityofliterature.ie/its-all-about-books-exhibition
★★★★
A few years ago Marie Hanlon attended an exhibition of Róisín de Buitléar’s glass works in DCU’s Cregan Library. The venue is a compact though airy space, a largely glazed enclosure perched at the Drumcondra Road end of the building’s top storey, with commanding views to the north, south and east of the city. To gain those views, you are, so to speak, standing on a small mountain of books, many thousands of volumes arranged on miles of shelving. Hanlon felt the resonance of the setting and thought that it would be good to make work directly addressing it. After a lot of hard work, her exhibition It’s All About Books is the result.

Each of her works is a distinct piece that stands on its own, but they share a level of anxiety or unease. Even when her approach is playful, as it often is, what we see is imbued with what might be described as a threat of nullity, the disappearance or cancellation of meaning. A Shelf of Blank Books, for example, is exactly what it says, a row between bookends of pristine white volumes of varying size. They are, the artist remarks, not so much erased as unwritten, books planned, begun, plotted, dreamt of, but ultimately unrealised.

At the same time, a blank white page is an invitation, an emblem of possibility. By contrast, Alas, poor Yorick! and Black Book are pure black. Alas is a nod to the stark black page in Laurence Sterne’s iconoclastic Tristram Shandy, an abrupt opening to infinity that appears in and disrupts the orderly narrative conventions. Black Book is, page by page, a painstakingly inked-over volume of unspecified title. It harbours print beneath the layers of ink. You could see it as every book, overprinted until the last glimmer of blank paper is extinguished, or the negation of all books in its blank denial of intelligibility. It’s both those things and more – a beautiful piece of work.

An opening performance piece, Assimilation, featured two participants who enacted the formative nature of reading: they become what they read, figuratively speaking, wearing words in the form of a garment imprinted with text. A fabric book bag was embellished with an illustration from Wicklow-born engineer Oliver Byrne’s innovative 1847 book treating the first six volumes of Euclid’s Elements in terms of coloured geometric diagrams. An oddity at the time, it has gained an increasingly enthusiastic audience ever since and was republished in a new edition in the recent past. Apart from anything else, Byrne’s ingenious, carefully calculated colour-coding produced elegant abstractions that not only clarify the mathematical logic, they seem to anticipate and inform movements in 20th-century abstract painting and design.

Between the extremes of black and white books are numerous shades of grey. New Words for Old revisits the controversy that arose when it emerged that the editors of a children’s dictionary had culled a host of words relating to the natural world while introducing terms derived from digital technologies and social media. Hanlon’s visualisation of a book-jacket frames the process, not unreasonably, as the replacement of one vocabulary by another, modish one.

Ulysses Bolted takes on James Joyce’s iconic masterpiece. Hanlon produced a facsimile of an early copy, a gift from Sylvia Beach in the collection of the National Library. She photographed the cover but rather than using a printed version of the original cover she found as close a blue as she could, and hand-lettered the typography. The first edition is a formidable physical object. She emphasises its monumentality by holding it together with four bolts, making it a sculptural monolith – which means you can’t open it, of course, rather defeating the purpose of a book. And, she points out, that is pretty much what happened to Ulysses, as it was banned and suppressed for years.

An ambiguous piece, Obsolete, is a perspex case in the shape of a book, stuffed with shredded pages. Connectivity in the form of smartphones and monitors with internet connection have infiltrated libraries as well as everywhere else, but it is probably not rash to suggest that libraries, and the physical, printed books they contain, appear likely to survive into the foreseeable future, despite fears that both might succumb to the digital revolution. Hanlon includes an imagined conversation, played out on a digital reader, arguing the environmental virtues and sustainability of the printed page as opposed to electronic alternatives, with their rare metals and high energy demands.

Pieces on the practice of ghost-writing and mystery novels are relatively slight, witty asides, but they both allude to vast precincts of the domain of book publishing and earn their place in the library. As does Hanlon’s Morris Column, her version of one of those advertising columns, as encountered in some European cities. Emblazoned with book-related posters, some custom-made, the column marks the boundary of the exhibition and seems, appropriately, like part of the furniture.

There is an accompanying, fully illustrated publication, It’s All About Books, with photography by Gillian Buckley and Marie Hanlon, and texts by Colm Tóibín, Joanne Laws, Catherine Marshall and Patricia Flynn.

Joe Duffy exposes the fiction of the HSE’s vaccine ads