Art in Focus: John Lavery, Two Figures on a Boat 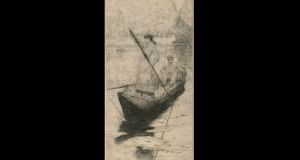 Two Figures on a Boat by John Lavery. Photograph: National Gallery of Ireland

Two Figures on a Boat is an etching by John Lavery.

Simply put, to create an etching, a metal plate, usually copper, is coated with an acid-resistant ground. The artist uses a point to draw into this ground. An acid bath eats into the exposed metal, the ground is cleared off and the plate inked and cleaned, leaving the ink in the incised lines and ready for printing. Reputedly Lavery’s only known etching, Two Figures is a subtle tonal patchwork of cross-hatching, very finely if not evenly worked, its textural qualities evoking painterly effects.

It is included in Making their Mark: Irish painter-etchers 1880-1930 in the Print Gallery at the National Gallery of Ireland, Merrion Sq/Clare St, Dublin until June 30th (nationalgallery.ie). Curated by Angela Griffith of Trinity Collection, Dublin and Anne Hodge, National Gallery of Ireland, the exhibition of about 50 works focuses on painter-etchers associated with the etching revival of the 1880s. Works from a wide range of public and private collections by Estella Solomons, Roderic O’Conor, Robert Goff, Percy Gethin, Edward Millington Synge, Stella Steyn and more are included, with contextual examples by Whistler, Seguin and others.

The subject matter is typical, the medium not. Born in Belfast, Lavery lost both parents within a few years and was in the care of relatives in Co Down until he was sent to school in Scotland. Unhappy, he eventually fled to Glasgow and worked as a clerk for a time. Returning to Moira, he did not settle and found his way back to Glasgow. He worked at retouching and tinting photographs, studying art in his spare time before deciding to try his luck as an artist. Financially self-dependent, he was always aware that art had to pay and he was from early on adept at marketing his talent. Even his apprentice pieces made as he studied in Paris were tailored to sell back home.

Arriving at the artists’ colony of Grez-sur-Loing in the summer of 1883, he befriended Frank O’Meara and others. He later said that his time at Grez was the happiest in his life. His own approach to plein air painting tended towards pictures of affluent people reclining in leisure boats on the river.

While he was never going to be an Impressionist, he was a fine landscape painter, attuned to atmospheric nuance. But he aspired to be a society portrait painter and he achieved that and more with stunning success in London. His marriage to Hazel Trudeau established them as an indispensable society couple.

His status in Edwardian society allowed him great political leeway and he knew and painted virtually all the major figures involved in the process of Irish independence, documenting Roger Casement’s trial, for example, and advising Winston Churchill that the English should get out of Ireland. Michael Collins stayed in the Laverys’ London house during the Treaty negotiations.