Lives and dreams in a midlands town captured in beautiful photographs 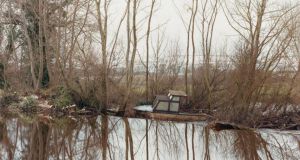 From: At Mirrored River, Enda Bowe

At Mirrored River is a series of photographs and a book by Enda Bowe. The photographs centre on an Irish midlands town. Portraits of local young people are situated in the context of their home terrain, the urban set against, and  blending into, the rural as it does in all small towns. Bowe is an exceptional photographer of both people and landscape. He cites the Irish word teannalach meaning awareness, especially of the intangible, which is what he aims for in his work.

Bowe deliberately did not identify the town because he did not intend the photographs to be a work of reportage. For him, the project wasn’t about location but “about mapping the feelings contained in the town”. Based in the UK, Bowe spent four years making periodic trips over, walking the land, noting seasonal changes – which are very noticeable in the work – and finding subjects. Every portrait began with a chance meeting with the subject and a conversation. Negotiation was integral to the process. He wanted to photograph people in their own spaces and it was important for him that they understood the nature of the project.

At Mirrored River is on view at The Library Project, 4 Temple Bar, Dublin until July 29th photoireland.org

Bowe tends to work on long-term projects, and he is fascinated by young people at that point in their lives where they have experienced something of life – its promise and its pitfalls – and are on the point of adulthood. They have, on the whole, learned to adjust their expectations of the future. He spent a great deal of time on Love’s Fire Song, a project exploring youth culture on both sides of Belfast’s “peace walls”. Not just young people, either. He reckons he is drawn to subjects who have for one reason or another come to a stage of wondering which direction their lives are to take. His series Coast, for example, looks at people visiting pilgrimage sites on Ireland’s west coast.     He is from a midlands background. The family moved several times during his childhood – his mother was a teacher, his father a Garda sergeant – always in the midlands, though they frequently visited his mother’s family in the west. He studied medical photography, with economic practicality in mind, but did not really like it, and went on to work in advertising in London. He came to specialise in lighting design. For his own work, the ideal is that the lighting never looks artificial or contrived.     His first book, Kilburn Cherry, consisted of photographs of cherry blossom in Kilburn in London – an oblique meditation on emigration and time. Searching for North is a close exploration of the Irish Border as a kind of Tarkovskian Zone (as in his film Stalker). Plum Plum Books will publish Bowe’s third monograph, Birds to the Air, this year.

Flash Gordon at 40: The greatest superhero film ever made?
8