Tom Edwards was thrilled to hear CEO was a fan, until he saw Tesla using his work without permission 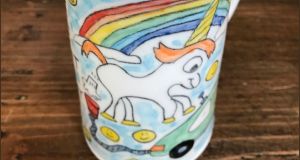 Elon Musk tweeted a photo of one of his original mugs featuring his cartoon drawing of a unicorn farting electricity. Photograph: Elon Musk/Twitter

Tom Edwards, a Colorado potter, was thrilled when Elon Musk tweeted a photo of one of his original mugs featuring his cartoon drawing of a unicorn farting electricity.

The Tesla CEO called it “maybe my favourite mug ever” in a February 2017 post – leading to a bump in sales from around the world.

Edwards was surprised however, when, a month later, Musk tweeted a copy of his cartoon image to promote Tesla’s new “sketch pad” feature, which allows drivers to draw on a touchscreen. Multiple news articles inaccurately reported that Musk was the one who created and drew the cartoon.

The 61-year-old artist was going to let it go until he learned the image was also appearing in Tesla’s operating system as a small icon – and that the company had even used it in a Christmas card.

“It’s part of their branding now,” Edwards said in an interview. “I love the fact that it’s in the cars, but I just want them to do the right thing and pay me adequately for it. Elon Musk can be a hero for standing up for artists’ rights.”

Musk, however, seems uninterested in compensating or crediting the artist. Instead, he tweeted at Edwards’ daughter this week that it would be “lame” to sue and that the potter should be grateful for the “attention”.

The dispute may seem low-stakes relative to the litany of scandals plaguing the electric car company – workplace safety complaints, major layoffs; high-profile “autopilot” car crashes, an exodus of executives, a suit against a whistleblower, and intense pressure to reach mass production of a new model.

But the use of Edwards’ work without compensation highlights what artists say is the kind of corporate theft and copyright infringement that has become rampant – forcing independent artists to engage in expensive legal battles to get credited and paid.

Edwards, who has been a potter for 40 years, first unveiled his unicorn farts mug in 2010 in a blogpost.

“Electric cars are good for the environment because electricity comes from magic,” he wrote.

He said he was making a joke about how people don’t understand the source of a car’s electricity and used the signature style of his Wallyware brand of light-hearted cartoons on mugs. Edwards also said he considered himself a “fan” of Musk.

But Tesla’s repeated use of the image’s copy and the resulting fawning news coverage began to irk him. Then in December, a Tesla-owning friend emailed him to note that the cars were promoting a holiday message that included his art.

“When I turned on my car this morning, Elon wished me a merry Christmas using a counterfeit Wally design,” the friend wrote.

Edwards then talked to numerous lawyers who told him it was a very clear case of a copyright violation, especially given that Musk had originally tweeted out an image of the mug, acknowledging it was someone else’s work.

So on May 23rd, Edwards’ lawyer, Tim Atkinson, sent a letter to Tesla’s general counsel, with the subject line: The Power of Magic.

The note said it was “not a cease and desist”, but an “invitation for all parties to continue to benefit from the whimsical, and amazingly spot on piece of imagery my client created in 2010, which now appropriately finds a home in the operating system of the magical vehicles your company produces”.

The letter said the image grew out of Edwards’ “admiration” for sustainable technologies and the work of “visionaries like Mr Musk”, adding that the letter was not meant to be a “shakedown” or “outrageous monetary demand”, but was seeking a “discussion” and a “mutual decision”.

Atkinson and Edwards said they have not received any response from Tesla. Musk only briefly addressed the matter after Edwards told his story to local newspaper Westword, and his daughter, a musician, tweeted it at Musk.

The CEO claimed he wasn’t responsible, saying the image was “chosen randomly by software team as a joke (they didn’t tell me in advance)”, and he offered to “change it to something else if your Dad wants”.

When she pressed Musk on using her father’s “creative property” for a year, the CEO doubled down, claiming it was “actually someone else’s drawing” and that he had asked his team to use something else.

“He can sue for money if he wants, but that’s kinda lame. If anything, this attention increased his mug sales,” said Musk, adding that Tesla “gained no financial benefit” from the image.

In an interview, Atkinson rejected Musk’s claim, noting that the use of the image, starting from the tweet promoting the sketch pad, has carried a “branding and marketing benefit” for Tesla. “All of this is valuable to the business.” He added that he was still hoping for an amicable resolution.

As of Wednesday afternoon, the unicorn still appeared on the Tesla touchscreen.

Edwards said he wanted to speak out in part because he often hears similar stories from artists. “I realize my farting unicorn is not as serious as whistleblowers,” he said, “but honestly, it’s all about integrity.”

He added: “I’d really like to get on Elon Musk’s good side … He’s really really interesting. But he isn’t above copyright law.”