Dublin city’s community and nightlife are under threat 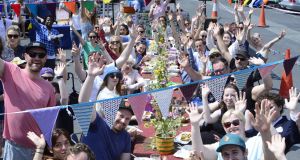 Dublin’s public spaces and nightlife are experiencing death by 1,000 paper cuts. Three recent unrelated episodes illustrate this. In two weeks the Dublin Flea Market has closed, the popular nightclub Hangar was forced to shut in a rush, and people were shooed off one of the city’s suntraps when a hose was employed to wet the Powerscourt Centre steps.

These apparently insignificant events may affect only a portion of Dubliners – predominantly young – but collectively they represent an erosion of Dublin’s public spaces and community hubs in favour of private developments.

These small losses flag the changing facade of a city that ranks as more expensive than London, and raise the question: who is the city for if not for its citizens?

After 10 years of business, the Dublin Flea Market in Newmarket Square closed two weeks ago. In that decade it has helped revive the surrounding neighbourhood of Dublin 8. The market – an important grassroots regeneration projects that emerged during Ireland’s recession – was a gathering place for a vibrant community, and its 80 stalls provided a platform for small businesses. It thrived in no small part thanks to its independence.

The market is now gone, soon to be replaced by a development of offices, a hotel, and some species of indoor market.

Rebecca Moynihan, Labour councillor for the south-west inner city, was one of the people who put forward a series of objections to the proposed planning in an effort to ensure it included artist and communal spaces.

“It’s a balance between what enhances the community and what is profitable,” she says. “What the flea market was good at doing was integrating these small Irish businesses that added a vibrancy to the city.”

The people behind the flea market knew that Newmarket Square was up for development, and they and Moynihan acknowledge that the landlord was good to them. But among those involved with the market, there is a sadness about it and a feeling that more could have been done.

“Ireland has a hang-up,” says Sharon Greene, one of the market’s organisers. “It’s insecure about its poor past and is always distancing itself from it. These [new] developments gear everything towards a mainstream and commercial angle, things that are nice, clean, and presentable.”

Two weeks ago, Hangar nightclub on Andrew’s Lane, Dublin 2, was forced to shut its doors so rapidly that it didn’t even have time to organise a farewell party. Hangar was one of the city’s few Dublin clubs large enough to host international house and techno DJs.

“It gave local talent the opportunity to play large crowds,” says Sam Greenwood, one of those behind the club. “There need to be platforms where people can share and develop their music in their own city.”

The upcoming closure was no surprise to the organisers, though its suddenness was. This property, too, is due to be developed into a hotel. (Dublin is to get more than 5,000 new hotel rooms by 2020).

“There needs to be some sort of incentive to protect venues like these. Otherwise we could end up with close to nothing,” Greenwood argues. “If we had late licences and a proper dance culture infrastructure I genuinely believe tourists would travel to Dublin specifically for the high quality music and experiences here.”

District 8, the only other similar venue of its kind left in the city, is also due to shut next year. Greenwood says it’s not only up to policymakers but also to the public to do something about this shrinking area of Dublin’s nightlife.

Last year a #SaveFabric campaign saw London’s Fabric nightclub close and reopen soon after in response to a show of public solidarity. Something similar is necessary here, Greenwood suggests.

Public outcry seems to have found an unlikely outlet in a practice at the Powerscourt Centre in Dublin city centre. In recent weeks, security staff have been hosing down the steps of the historic building on South William Street every 20 minutes, apparently to prevent people from sitting there drinking beers in the sun.

“Our primary concern is health and safety,” says Mary Larkin, spokesperson at Powerscourt Centre says. The steps are one of the buildings three fire exits and hosing them down “is nothing new, people are just noticing because of the sun,” Larkin goes on.

She stresses that the shopping centre is a private space, not a public one, saying that the behaviour on the steps stops people from gaining access to the centre, creating “potential for accidents to happen”.

There have as of yet been no incidents or accidents, but Larkin points to the amount of rubbish and occasional broken glass left on the steps.

The Powerscourt Centre is a private entity and can do as it chooses in relation to its property. However, the decision to prevent people from using the steps is another instance of private property’s encroachment on an area used by the public.

“It’s a really regressive approach to how we deal with collective places in the city,” says Rebecca Moynihan, who sees wetting the steps as a way of “sanitising” the city.

Dublin City Council’s Public Realm plan states that the public-realm is an “important part of Dublin’s identity, of how we understand ourselves and how we want to present ourselves to others”. Yet the city, Moynihan believes, is being turned into “a museum for tourists instead of a place for all Dubliners”.

Last month’s vote to repeal the Eighth Amendment was partly a victory for young citizens. In the final three days before registration closed in early May, an estimated 125,000 young voters registered to vote for the first time. Eighty-four per cent of young voters voted for Repeal.

It raises that the question of “what next?” Amid the many important issues (Northern Ireland’s abortion laws, direct provision, the housing crisis) that should be tackled are many affecting one electoral group in particular: the newly emboldened youth voter.

In Dublin, home to the highest concentration of young voters, this could be done by generating and implementing policies that protect things that matter to the young – such as nightlife and its community spaces.

It’s up to young voters, too, to realise that we’re the ones that suffer if Dublin turns into a city of hotel rooms.

The Irish Times contacted the companies behind the Andrew’s Lane and Newmarket developments, but neither had responded at time of publication.