A powerful contemporary painter of the human condition 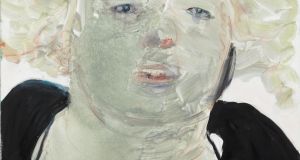 What is it?
Self-portrait at Noon is a painting by Marlene Dumas.

How was it done?
Dumas is generally regarded as one of the finest painters of the human figure of her time. However, as with another leading figurative painter, the Belgian Luc Tuymans, she works not from life, but from photographic references: her own photographs or Polaroid’s, or reproduced media imagery – she used collage a lot at one point. While not unusually prolific, she works fast and energetically, and her fluent, fluid paintings, in diluted oil or watercolour or ink, have tremendous immediacy and, almost paradoxically given her enduring fascination with death, vitality. Working from photographs puts the subject at a distance, all the more so given that Dumas favours a non-naturalistic palette, typically rendering faces and bodies with pale, sickly hues.

Where can I see it?
The painting is included in Face to Face, an exhibition at the Kerlin Gallery, Dublin (Until August 18th, kerlin.ie). Drawn from the collection of the De Pont Museum in the Netherlands and curated by its director Hendrik Driessen, the show features 24 works by a total of 12 contemporary artists.

Is it a typical work by the artist?
Fairly typical. Dumas has made many self-portraits, and she does not approach her own likeness differently from her other subjects. Born in Cape Town, South Africa, she grew up on the family winery close to the city. Her father died when she was only 12 years old, but Marlene was nurtured by her mother and her lively, Afrikaans-speaking extended family, and went on to study art locally.

She has noted that at art school her South African background, as a white person in a black country, led her to engage with theoretical questions about politics, identity and ethics, rather than coming to these issues later on, as she might have done if she was brought up in Europe.

Conversely, when she moved to Amsterdam, in 1976, having been awarded a bursary to study abroad, she was belatedly struck by the visual, pictorial quality of great paintings. Ethics and aesthetics have consistently been inextricably enmeshed in her work.

Initially homesick, she settled in Amsterdam and has worked there since. She has never shied away from difficult or contentious subject matter – pornographic imagery, posthumous portraits of such figures as Ulrike Meinhof or indeed Amy Winehouse, the barbarity of Abu Ghraib, Osama bin Laden, a painting based on a photograph of her young, paint-daubed daughter that unsettled some major public galleries.

What comes across predominantly is a profound, troubling sense of human vulnerability. Dumas invariably paints out of honest fascination and is, by all accounts, a far more cheerful and positive person than the darkness of much of her work might suggest.

There’s also a note of black humour. As she observed in a Vogue interview in 2015, quoting Beckett: “Nothing is funnier than unhappiness”

Dining out: 11 of Dublin’s best restaurants with outdoor spaces