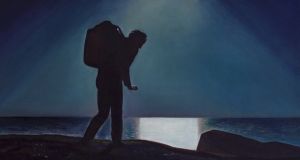 When Kevin Magee walked into Roarty’s pub in Glencolmcille, in search of refreshment after a long day’s cycling, the first thing he noticed was a framed image of a young woman in a blue dress. She was lying barefoot on a clifftop, with all the austere beauty of Donegal sea and sky behind her.

“That’s Annie McGinley,” said the bar-man, when Magee enquired. He told Magee that it was a print of a painting by the great American artist Rockwell Kent, who visited Donegal in 1926 and spent four months there, painting the wild landscape and the local people, like Annie.

Dan looked at the paintings for ages. Then he took his pipe out of his mouth and pronounced ‘they’re terrible’

Magee, who works as an investigations correspondent with the BBC in Belfast, was intrigued by this forgotten piece of art history. He decided to track down the paintings that Kent made during his stay in this part of the Donegal Gaeltacht, as well as the descendants of the people who appeared in them.

Magee’s search took him to galleries and private collections in St Petersburg and New York, and he also discovered how Kent’s Irish art played a surprising role in cold war relations.

The remarkable story is told for the first time in Ar Lorg Annie/In Search of Annie, which will be broadcast on BBC2 Northern Ireland on Sunday at 10.15pm.

Kent came to Ireland seeking isolation and the untamed elements, and he was keen to go as far west as he could. He had painted in largely uninhabited parts of Greenland, Newfoundland and Tierra del Fuego. But his time in Donegal was different. After Kent moved into a tumbledown cow-shed that he rented from local farmer Dan Ward, he built up a close connection with his neighbours that survived for a lifetime, and which is remembered in Glencolmcille to this day. Even the cow-shed is still standing.

Magee says that Kent was a snappy dresser, well turned out in his sharp suit, hat and cane, despite the very basic conditions he was living in. “He was exotic, like a movie star. People had never seen anyone like him.” Magee likens the sensation caused by Kent’s arrival to the filming of the Hollywood classic The Quiet Man in Co Mayo: “Before Cong got John Wayne, Glencolmcille got Rockwell Kent.” Annie McGinley, who was 20 at the time Kent painted her, lived in the next homestead to the Wards.

When Kent won the right to travel in 1958, the first place he visited was Ireland

“The first people to see Kent’s Irish paintings were Rose and Dan Ward,” says Magee. “He invited them for tea to his cow-shed. Dan looked at the paintings for ages. Then he took his pipe out of his mouth and pronounced ‘they’re terrible’.” But the hill farmer’s verdict didn’t affect their friendship. When Kent returned to the United States, bringing with him 36 paintings, he stayed in touch, by letter, with Ward.

Kent was intensely political. He was a socialist and a strong advocate of nuclear disarmament and when he forged links with the Russians, with the stated aim of supporting world peace, he quickly found himself embroiled in cold war politics. He was frequently accused of being a communist, which he denied.

The Committee on Un-American Activities named Kent as number one on its list of American “subversives”, and he was interrogated by Senator Joseph McCarthy. During the 1950s, the State Department denied him a passport. Kent took his case to the US Supreme Court and won a landmark victory. Characteristically laconic, he remarked: “I’m an American who doesn’t want his corns stepped on.”

Magee says that during this legal battle, Dan Ward wrote to Kent and offered to sell him his mountain farm. Kent was keen to buy the land – he planned to go there and paint for several months of the year – but was unable to travel because of the passport fiasco.

When Kent won the right to travel in 1958, the first place he visited was Ireland, where he was reunited with his friends in Glencolmcille. Later, he travelled to Russia, and was rapturously received and celebrated as an artist, winning the Lenin Prize. In return, Kent donated 83 of his best paintings to the Russians, including one named Dan Ward’s Stack. Magee found this art work, showing the Donegal farmer building a hay-stack with his neighbours – Kent’s cow-shed in the background – on display in the Hermitage museum in St Petersburg. And he discovered the original (and very valuable) Annie McGinley hanging above the fireplace of a wealthy family in New York.

Rockwell Kent died in 1971. In a front page obituary, the New York Times observed that “his style was distinctive, vigorous and simple, yet his people were portrayed with the subtle compassion of one who knew their secrets.” Magee’s film shows how Kent’s relationship with the people of the Donegal Gaeltacht produced some of the most striking artworks of his long career. Yet the original paintings have never been seen by an Irish audience.

The Books Quiz: Who wrote The Naked Lunch?
Real news has value SUBSCRIBE