On a Pedestal: contemporary takes on the classical portrait bust

A thoughtful exhibition at the Long Gallery in Castletown House, Kildare 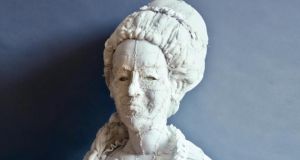 This year, observes Mary Heffernan, the general manager of Castletown House, is the 275th anniversary of the birth of “the great heroine of the story of Castletown”, Lady Louisa Connolly. On a Pedestal, an exhibition of portrait busts at Castletown, is intended as an homage to Louisa, and “the magical Long Gallery she created”.

In 1743 Louisa was born into privileged circumstances: her father was the second Duke of Richmond, and her childhood was spent in great houses, including Richmond House in Whitehall, Goodwood House in Sussex and, after her parents died within a year of each other, Carton House in Co Kildare. She married Thomas Connolly of Castletown, the wealthiest man in Ireland, in 1758.

Inspired by the many houses she knew and loved, she set about making changes to Castletown, including a new cantilevered staircase, La Franchini plasterwork, the print room, diningroom and the Long Gallery.

The gallery, which she referred to as her livingroom, housed her library with busts and murals of classical writers, philosophers, gods and goddesses, including the nine muses. Compare it to the collection in the Long Gallery in Trinity College Dublin, initiated in 1743, which historian Hélène Bremer describes as the most significant single influence on Louisa’s project at Castletown, adding that the practice of “surrounding oneself with portrait busts originated in the Renaissance”.

In 2014 Heffernan, working with Nuala Goodman, fashioned a memorable exhibition at the Casino in Marino, Meditation on Plates. Looking to make an exhibition at Castletown, Louisa’s Long Gallery with its collection of busts, seemed like another opportunity. Their rationale is that, rather than simply situating contemporary art in an historical setting, it should in some way reflect the setting and the lives of those who created and lived in it.

Gradually, through discussions with Jeremy Musson and Bremer (who co-curated with Heffernan and Goodman), the idea took shape that artists might respond to Louisa’s collection by offering a contemporary take on the portrait bust. Bremer begins with a simple definition: “A statue of the head and shoulders of a person.” But while artists still refer to the classical bust, they also “either manipulate or conceptualise it freely by form and meaning”, she adds.

One might be inclined to ask whether that many contemporary artists are so disposed. There are, as it happens, with work by 32 of them at Castletown. It is a hugely thoughtful show. There’s hardly a piece in it that doesn’t embody a subtle, clever, considered response to the overall conceptual framework.

French artist Anne Valérie Dupond gets right to the point with her portrait bust of Louisa. It is part of a series by the artist under the title Les Grands Hommes, an allusion to the fact that male subjects were usually sculpted in posh materials by male artists. Her Louisa is a beautifully made sculpture fashioned from vintage fabric, thread, stuffing material and cardboard – traditionally feminine materials and techniques.

Ann Carrington also uses choice of materials to undercut pretensions of heroism and nobility in busts. Her Noble Nobleman, from her Piss Head series, is fashioned entirely and ingeniously from crushed beer cans. Ice serves a comparable purpose in Sam Curtis’s Monument to the Fishmonger. Having worked as a fishmonger, it seemed to him that the occupation was just as deserving of celebration as were icons of power or celebrity.

Jam Sutton’s David and Goliath takes another approach to deposing the heroic male subject. Sutton’s David, with the appearance of a modern youth, has toppled the head and sits on the plinth. While he’s stuck to an archetypal material, Carrara marble, the sculpture has been produced by computerised scanning and cutting, lending it a curiously bland, anonymous quality, despite or perhaps because of its flawless accuracy: something of an artist’s personality always comes through in traditional carving. Bremer points out that, in classical busts, heroic projection trumped fidelity to likeness, but that gradually changed as the Romans progressed towards producing representations of individuals “with specific anatomy and characteristics”.

Wild Relatives, Tony Cragg’s dynamic form, suggests a process of MRI slicing through a head and shoulders that becomes misaligned and distorted, generating an impossible but semi-recognisable bust. In a more traditional, straightforward way, Wim Delvoye does something comparable with his Twisted bust. Barry X Ball’s Dual in Belgian black marble, is a kind of three-dimensional Rorschach blot, a “bilateral Janusian abstraction”.

Giulio Paolini places two identical classical casts facing each other, as if they are having a dialogue. Between them, they create a charged space from which we, the viewers, are excluded. Put another way, the positioning gives us an impression of inner life. Claire Curneen (whose work was recently seen in an outstanding show at Oliver Sears in Dublin), works directly with the forms and imagery of classical mythology, producing porcelain pieces that are complex, rich and fascinating. Another artist who manages to brilliantly evoke the classical without any hint of apology or irony is Emily Young, in her Dark forest head, carved in dolomitic limestone.

Janet Mullarney’s diminutive cast aluminium Rishabadeva may lack a head and takes the form of shoulders and upper torso, but it is elegantly, remarkably expressive of individual presence and spirit and takes its inspiration from depictions of Indian deities. There are many other superb pieces – by, for example, Ursula Burke, Kimiko Yoshida, Gregory Grozos, Léo Caillard, Bruno Walpoth and Juliette Clovis. While the show is bound to look good in Dublin Castle, to see it at Castletown is the real deal.