Satirising Donald Trump: ‘It’s a struggle just to keep up’

Cartoonist Dan Perkins: It’s hard coming up with something crazier than what's actually going on 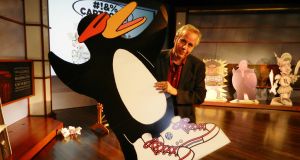 Dan Perkins, aka Tom Tomorrow, is tired of drawing Donald Trump. Perkins has drawn him as an angry baby, as a deranged superhero/villain, as the sensible leader of a topsy-turvy Bizarro USA and, most frequently, as Trump just being Trump.

Is the gaudy, cognitively-impaired oligarch not a boon for weekly news satirists like Perkins? He sighs. “[It’s] like waking up and saying ‘I’d like a glass of water’ and then having someone spray you in the face with a fire hose. One of the biggest challenges of the Trump presidency has been coming up with something satirical that’s crazier than the things that are actually going on.”

Perkins has been writing and drawing his news-skewering, penguin-featuring This Modern World comic strip for more than 30 years. His work has appeared in publications including the Village Voice, Salon, The New Yorker and The Economist and it currently runs in The Daily Kos.

The product of a “disjointed childhood” – “My parents were divorced and we moved around a lot” – Perkins always wanted to be a cartoonist. He was the funny kid in school who absorbed the work of underground comic-creators such as Robert Crumb and Gilbert Shelton and adored Mad Magazine.

The social realism of capitalism

His first strips appeared in the late 1980s in Processed World, a zine produced by disgruntled IT workers (the Tom Tomorrow pseudonym stems from that era).

How did he find his style? “In my early 20s I found this pile of old Life magazines in a junk store and I started looking through these happy, advertising images and thought ‘this stuff is brilliant’,” he says. “I began referencing a graphic design from a period 30 years in the past but still somewhat recent. Now it’s 55 or 60 years in the past. I’m actually surprised it still works, but American mid-century advertising imagery is the social realism of capitalism. Social realism conveys the Soviet ideal of happy workers in the factories determined to do what they need to do for the greater good. Mid-century advertising imagery is capitalism’s version of that. I found it fascinating.”

He sometimes engages in non-comic-strip activities. In 2009 he published a children’s book, The Very Silly Mayor, about a loose cannon politician who did idiotic things but who people were afraid to criticise. “He’s a little too likeable to be Trump,” says Perkins, “but it would certainly have a lot of resonance right now.”

The same year he was approached by Pearl Jam’s Eddie Vedder, who he had met at a Ralph Nader fundraiser, to create the band’s Backspacer album cover. “Pearl Jam arrived at a moment when I had tuned out of popular music and was focused entirely on Rush Limbaugh and right-wing radio [for research purposes],” he says. “So when I met Ed he was a bigger fan of mine than I was of his, which was a strange dynamic in retrospect.”

The decline of print media was hurting him at that point. A lot of the alternative left-wing weekly papers which carried his work were going under and he was finding it difficult to secure a publisher for his collections.

“I was thinking of phasing out the cartoon, retiring it and doing some other creative project,” he says. “But I felt like if I was even thinking of that I really needed to mark it. This was my life’s work. This was the thing I’d done. I may have a stunning late-life career in brain surgery or something but I doubt it. This is the thing I’ve done and I wanted it in some coherent order that would outlive me.”

In 2015, he and some friends instigated a Kickstarter crowd-funding campaign to publish a two-volume complete collection of This Modern World to commemorate the strip’s 25th birthday. He promised fans to get a tattoo of his on-the-page alter-ego Sparky the Penguin if they reached $250,000 (€219k).

He laughs. “I did not expect to have to do it,” he says. “[The response] blew my mind and I’m still so grateful to everyone. As a cartoonist you work from home and you are basically isolated . . . so to have a dramatic show of support, yeah that was quite an important moment.”

Things have improved. He has found a publisher for his collections (IDW) and he’s hardly underappreciated. He won the coveted Herblock Prize for political cartooning in 2013 and he was a Pulitzer finalist in 2015, though he scoffs at the idea he was every going to win that prize. “I think I’m too disreputable.”

What’s disreputable about him? He laughs. “One of my winning cartoons [for the Herblock] was about men trying to control women’s reproductive choices and it made specific reference to the clitoris . . . A joke like that is not going to pass the Pulitzer board. They don’t want to associate the Pulitzer with a cartoon referencing the clitoris.”

How was cartooning in the era of Obama different from today? “I would spend a lot of time writing about the surveillance state or the drone war, and partisan Democrats would get very angry,” he says. “But I think it’s important to criticise power no matter who is in power. Obama did a lot to consolidate the power of the executive branch and I did a lot of cartoons saying ‘This is not a good idea! You may trust this guy, but he is not going to be in power forever’.”

He sighs. “And now we’re in an entirely different political situation . . . For a while I was on Pacific time and it was kind of exhausting because I would wake up at 7. . . and the first thing I’d see was what idiotic nonsense Trump had already been tweeting for three hours. At the end of the year for 10 years, I’ve been doing these year-in-review cartoons. I can’t do that with Trump. I’d get two days into the year and have no space left. Someone said that he’s like a ‘direct denial of service’ attack on democracy. He’s definitely a DDoS attack on satire.”

Perkins sometimes suffers from outrage fatigue and envies those who don’t need to consume news for a living. “I mean, I’ve been making the basic case for healthcare [in my cartoons] for over 25 years,” he says. “I’ve almost given up on gun control. There was a point when we’d have a big massacre and I’d feel compelled to write about it . . . but at a certain point the f**king massacres became too commonplace . . . I can’t say that doing this work on this level, with this level of focus, leads naturally to optimism but I think you have to have some optimism or you’d just give up entirely.”

So why create satire at all? “Satire is a way of trying to sneak an idea] past people’s defences . . . and it also exists to mock people with whom you disagree. Mockery is one of the best ways for the powerless to undermine the powerful. Mockery is a powerful and underestimated force.”

People underestimate what satirical cartoonists do, he says. “Columnists have to make an argument. I have to make that argument and put it into some form of clever, amusing, high-concept cartoon. The quote about Ginger Rogers – that she did everything Fred Astaire did, but backwards and in high heels – that is kind of my relationship with newspaper columnists. Not that I really wear high heels.” He laughs. “Though I work alone, so who knows?”