The best art shows this week

Theresa Nanigian: Master of My Universe, Radical Love # Female Lust, Where History Begins, Another Bite of the Cherry, and Tronies 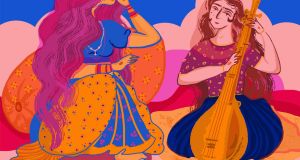 Theresa Nanigian: Master of My Universe
Limerick City Gallery of Art, Pery Square, Limerick. Until January 14. gallery.limerick.ie
The second instalment of Theresa Nanigian’s three-part project, “just a bit extraordinary”, charting human life stages. Master of My Universe considers “the middle developmental stage of adulthood”, when earning a living is a major preoccupation.  Nanigian finds a metaphor for this stage of life in the subculture formed by the many individual vendors who deal on the boardwalk of Venice Beach, California. Despite the huge range of people and backgrounds, and the potential for competitive conflict, she found a mutually supportive network. She documented their stories as well as picturing them opposite their stall-fronts and includes samples of what they sell.

In a touring exhibition initiated by Róisín O’ Loughlin (and previously seen at the Crypt Gallery in London and the Women of the World Festival), 46 female artists respond to poems by Arabic women poets of 1,000 years ago, assembled in a Yale University Press volume, Radical Love. The poetry “challenges preconceptions of faith, of class, of the female experience long ago; they capture what it is to relish life and living”. The poems quoted come across as remarkably contemporary and immediate. They, and the artworks, are more nuanced in their concerns than the Female Lust subtitle might suggest.

Where History Begins
Void, Derry. Until December 16. derryvoid.com
Does material culture – as in archaeological troves – reflect or embody historical truth? Nationalism, colonialism and capitalism tend to skew the question. This show gathers four works that address how we construct historical narratives, together with artefacts related to Derry’s history from the early Neolithic. Ali Cherri’s film Petrified concerns the fetishisation of historical artifacts. Christodoulos Panayiotou’s Real Fakes consists of stones discarded at an archaeological site. Duncan Campbell’s, It For Others considers the commodification of cultural artifacts. Kader Attia’s film Reflecting Memory draws an analogy between the phantom limb phenomenon and the colonial experience.

Botanically themed group show organised by the Graphic Studio, Dublin, incorporating work by over 50 artists. The brief was that they respond to or in some way draw on an aspect of the 19.5 hectares of the gardens. That might range from individual botanical studies to, say, work prompted by Richard Turner’s celebrated Curvilinear Range of glasshouses, carefully restored in the 1990s or, indeed, something entirely abstract. The reach is international, with artists from Ireland, the UK, Germany, Poland, Lithuania, Israel, New Zealand and Sweden.

Cian McLoughlin: Tronies
Molesworth Gallery,  Molesworth St, Dublin. Until November 30
A tronie, the National Gallery of Ireland’s Adriaan E Waiboer explains, translates as “face” and is generally used in relation to Baroque art. It refers to portraits undertaken not on commission but out of personal interest on the part of the artist. Cian McLoughlin, known for his large-scale, expressionist portrait paintings, here sets out to make things difficult for himself. Rather than using expression as an aid to illuminating character, he sets up battles between the task of representation and the gestural mark. Distortions and diversions ensue. His gamble is that the resultant images will still engage us on grounds other than mere likeness.

Notes from a Quiet Land, Madison Beer and La Bohème in your home: This week’s unmissable events