The woolly wonderland of a sheep farmer and artist

Orla Barry is both, and her latest exhibition draws pleasingly from both worlds 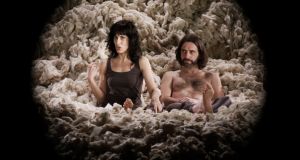 To those who think art is elitist, it’s time to get a load of the world of sheep. Orla Barry is a contemporary artist with an international reputation. She’s also a successful sheep farmer, so she knows a great deal about both. “It’s the specialist knowledge,” she says, when I meet her on her farm in Co Wexford. “Words like ‘shearling’ and ‘hogget’.”

Her farm is a beautiful spot, near Duncormick, and reached down a lane that runs through fertile fields. Chickens run about, half-heartedly herded by a sheepdog, keeping his paws in until his real job calls. Inside there are artworks by Barry and other artist friends in a welcoming, bright space. We sit outside on a little terrace, with a view to the estuary, and across the fields to where Barry’s sheep are grazing. Els Dietvorst, an artist, film-maker and Barry’s partner, brings cake, and Barry elaborates on the perils and pleasures of sheep farming.

“It’s very physical, bloody tough on your body,” she says. “I’m damaged all over from sheep.” Any thoughts I had about watching your woolly assets mature as you sip tea and eat cake are quickly dashed with talk of such gruesome things as fly strike (which involves bluebottles and maggots). Nevertheless, Barry also finds time to balance this with her career as an artist. Her exhibition and performance Breaking bows is now at the Wexford Arts Centre.

What does the title mean? “It’s always the question people ask, but I want them to have their own ideas. Perhaps it’s about the impossibility, the beauty of nature,” she says. The exhibition came from her experiences farming sheep, which in turn followed her return to Ireland from Belgium, shortly after a major exhibition at Imma in 2006. “When we moved back, I knew it wouldn’t be enough to just make art.” Her father, a farmer, had provided some land. Someone suggested growing micro greens, but Barry had other ambitions.

“I started with Zwartbles,” she says of the fetching, but high-maintenance, black, Dutch rare-breed sheep. They are extremely cute, with a white stripe down their faces. “I used to call them my art sheep,” Barry says, describing not only their look but how tricky they are to keep. Since then she switched to the Lleyn sheep, which she raises as pedigree breeding stock. “Of course I got seduced by the arty sheep. The Lleyn are more self-sufficient.”

The aesthetics of sheep

How much is a sheep? “That’s the big question. A ram got 900 guineas yesterday [some pedigree livestock auctions still work in guineas; 900 guineas would be roughly €1,070] .” Not hers, she hastens to add. “It can go that high because two people want it. It’s just like art. You’re trying to attract the rich buyers, and aesthetics get involved … It’s so subjective.”

This theme is explored in one of the videos in Breaking Rainbows, which features a series of stories, dialogues and monologues, that range from the world according to sheep, through mythology, via natural lore and our increasing disconnection from it, climate change, capitalism and fad diets, to events in the life of a sheep farmer.

“With monologue and voice-over you can give anything a voice, even a stone or a piece of seaweed,” Barry has said. In Breaking Rainbows, the performers base their set in a pile made up of a year’s worth of wool from Barry’s sheep. Banners surround the video screen, covered in letters spelling out sounds that all relate back to the central questions of, as we distance ourselves from the ecologies that have always supported us, what we have lost, and what new problems do we gain?

“Pedigree livestock and artworks are very similar; both are the subject of personal opinion and their value is different to anyone that sees them,” says a character in one section. “It’s that question of why people will pay something for an animal,” adds Barry. “Then there’s people’s proudness when they’re showing an animal, and the adrenaline of the sales.”

Where do the two worlds differ? “At openings, people don’t really talk about the art. But at the sales, they’ll talk about sheep. It is like being an expert in another world. It’s like a hedge school; you’re learning from your neighbours. And then there are the firsts: the first time you make silage, the first time you lamb a lamb.”

Up for a cuddle

We walk down a lane, past a small flock of geese, to go and meet the rams. These sheep know Barry, so they come up for a cuddle. They’re soft, like pillows, and they have deep amber eyes. They love being scratched. Barry checks anxiously for fly strike.

Stories weave through her films and installations, and they can demand time to grasp their essence

Barry reminds me how sheep are there throughout human history. “There are sheep in the Bible, in Greek mythology. I wanted to get them into my work, and I wanted to do it from lived experience.”

Barry is great company, and has that type of intelligence that loves ideas, references and connections, and that is always alert to more, no matter in which field they may lie. She’s also brave enough to follow wherever they lead. Her dogs, Sno and May, dash about, keeping an eye on the sheep and Barry all the time. “Sheepdogs need short names,” she observes.

Barry’s international career has seen her work shown across Europe and, despite living in Belgium for more than a decade, Ireland has often been the basis for most of her explorations, though the themes are universal. Previous works have explored memory, finding yourself in a fragmented world, time, anxiety, and the gap between words and actions. Stories weave through her films and installations, and they can demand time to grasp their essence. But when you do you’re well rewarded, with insights into what it means to be human and, in this case, also animal.

As we face an increasing danger of losing touch with where we have come from, the importance of these things increases. Sheep farmer and artist – why not? In Breaking Rainbows it all starts to make a beautiful kind of sense.

Breaking Rainbows is at the Wexford Arts Centre until November 18th; wexfordartscentre.ie