The best art exhibitions to catch this weekend

Wormwood at the Ellis King gallery is worth a shot; as are Anne Madden’s observations of life and death at Taylor Galleries 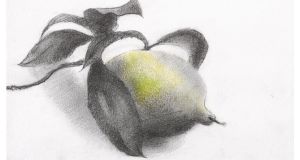 Anne Madden, Lemon on Tree, from Life and Death in the Garden at the Taylor Galleries, Dublin

There’s a zeitgeisty sense of the spiritual (think of IMMA’s current As Above, So Below until August 27th), with an added whiff of end-of-days, haunting the new group exhibition at Ellis King, in which 23 artists get to grips with themes arising from the evocative word: Wormwood. Twenty-three might sound like a lot, even in Ellis King’s capacious warehouse space, but as these include John Gerrard, Lutz Bacher, Lynda Benglis, Helmut Lang and Sherrie Levine, it promises to be a lively ride.

Add to that the fact that Wormwood is not only mentioned Biblically in Revelation, it’s also a key ingredient in 19th-century demimonde tipple of choice, Absinthe, and you’ve got the right mix for a fascinating art party. Wormwood itself is said to induce clarity of thought, increase creativity and perception and allow one to “see beyond”. Worth a shot? GT

Edinburgh-born Dougal McKenzie has long – some 27 years - been based in Belfast. While his work has consistently reflected on the past and memory, relishing a slight oddness in the world and how we see it, in this new body of work he explicitly sets out to revisit Edinburgh. The title is from Allan Massie’s fictionalized life of Sir Walter Scott. McKenzie explores Edinburgh in the light of Scott’s The Heart and Midlothian, the historic Porteous Riots of 1736, his own memories of the city and his father’s recollections of studying at the university there. The quad served as a set for a film of Journey to the Centre of the Earth starring James Mason. McKenzie relishes the rich mix of fact, fiction and speculation. AD

As one of Ireland’s leading private galleries, it’s always interesting to see who the team at Kerlin select for their annual showcase of new talent. Here, four artists are under the spotlight. Marcel Vidal’s uncannily realistic paintings, often accompanied by sculpture, grab attention, while Hannah Fitz’s sculptures are pleasingly just on the right side of strange.

Áine McBride’s specially-made partition (ceramic feet and all) is a demand that you take notice, while Texan artist Daniel Rios Rodriguez piles on paint in a style that might remind you of Paul Mosse, but which is in fact all his own. Each of the artists already has a strong exhibiting history, but there’s something about the part of the artworld where value means price that can make you look at things differently. It shouldn’t, but it does. GT

Contemporary artists associated with Co Wexford – with the emphasis on painting, though Michael Warren, for one, is best known as a sculptor. George Warren has established himself as both painter and sculptor, often combining the two. The show’s title is from a Susan Stewart poem, A Language. The proposition is that we consider the work on view in the light of both dreams and language: “dreams referring to the unknown, buried, even random parts of the self, and language, a more formal, structured, conscious communication system.”

It’s a jungle out there. Apart from making an epic series of paintings that form her current exhibition Hugh Lane Gallery, Anne Madden was working on a more intimate scale at her home, creating drawings, watercolours and gouaches that looked to her own garden as subject matter.

She is a close observer of this small corner of cultivated nature through the seasons and has great fondness for many of the creatures it harbours, especially blackbirds. The death of one cherished and familiar blackbird prompted her to mark its passing, and these meticulously naturalistic studies are the result. They document the intricate beauty of blossoms and birds, and note the transience of things. AD