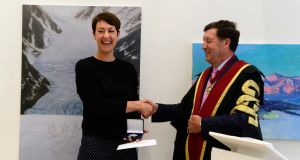 Miranda Blennerhassett is the winner of this year’s Royal College of Surgeons (RCSI) Art Award.

Blennerhassett won for her installation RHA, which is in the gallery’s north stairwell. She wins the RCSI silver medal, €5,000 and a €10,000 commission for a new work for the RCSI.

It was part of a shortlist of five works chosen from this year’s Royal Hibernian Academy (RHA) Annual Exhibition. The other shortlisted works were: Vinyl Factory by Colin Martin; Guess Who’s Coming to Dinner, No 2 by Abigail O’Brien; Angular Momentum by Eilis O’Connell; and Fuji and Fujidelic by Kathy Prendergast. The work was chosen from the 551 pieces on display at the RHA’s annual exhibition. The prize is a collaboration between the RHA, the RCSI and The Irish Times.

Speaking at the prize’s award ceremony in the RHA last night, Mick O’Dea, president of the RHA, said: “The RCSI award is the biggest award in our canon of prizes. It’s a tremendous pool of artists that the prize selects from [and] the five artists shortlisted are of the highest calibre.” The award was presented by Prof John Hyland, president of RCSI.

Blennerhassett was born in Scotland, studied at NCAD and now lives and works in Dublin. She works with a variety of mediums such as installation, animation and printmaking that typically look at the relationship between art and architecture.

Her piece is made up of a series of red wallpaper cut outs in a repetitive pattern that she has placed on to the glass panels of the RHA’s north stairwell. Speaking shortly after receiving her award, she said: “I was delighted to be asked just to make the installation. What I really wanted to do was work with the glass and not the walls. I wanted to work with the bits that we touch and physically engage with in the building.

“I like working on bits of a building that people don’t usually think about. I get asked to work anywhere in a gallery and I usually end up in a dark corner or a stairwell. Because those parts are usually fundamental to a place . . . these are rudimentary and functional and so disregarded.”

The material used is also relatively basic. “It’s kind of 1970s Indian restaurant wallpaper which has slightly the feel of aspirational interior patterns, where a restaurant is trying to make itself look like a 15th-century French mansion in Versailles or something. There is no irony in it at all, I think that’s genuinely interesting.”

It came from one of her favourite sources: Lenehans hardware shop on Dublin’s Capel Street. “I kept going back for more and more. The whole shop was wondering what I was doing. They ran out half way through, and I had to ask them to order more as I was panicing.”

The prize, she says, “will pretty much pay for my studio for a year” and the commission is roughly on a par with what she received for a major work she did for Facebook’s Dublin headquarters. “That’s the standard we should be aiming for, especially corporate clients. In September I’m doing a show in Athlone, I’m getting €100 for it and it’s going to take two months’ work.”

The RCSI Art Award was established in 2016 to celebrate the common heritage of RCSI and the RHA and the association between art, medicine and wellbeing. The panel of judges was Mick O’Dea; Prof John Hyland, president of the RCSI; Patrick T Murphy, director of the RHA; Prof Clive Lee, professor of anatomy at the RCSI and the RHA; Dr Abdul Bulbulia, Louise Loughran and Jane Butler of the RCSI; and this writer.

Speaking at the ceremony, Paul O’Neill, Editor of The Irish Times said: “The collaboration of the RHA, the RCSI and The Irish Times fits into our mission. Often when we interview artists, writers and filmmakers they often refer back to a specific grant or an award that they got which gave them the freedom and the confidence to focus on a particular work. It would be nice to think that as a result of today one of the artists here will go on to do something that will continue to drive our vibrant visual arts.”

Prof Cathal Kelly, chief executive/registrar of the RCSI said: “We are delighted to present the second annual prize to Miranda Blennerhassett for this inspirational and ingenious installation. We look forward to working with the artist to create a new work for the RCSI campus that will inspire and spark a sense curiosity and wellbeing in our students and trainees while they train as future healthcare leaders here in RCSI.”