Along the path of blue and silver 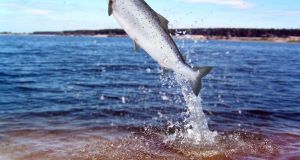 jumping out from water salmon on sea background 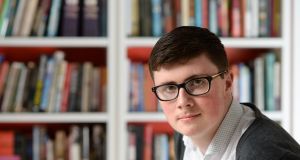 Just a few moments ago, he had moved along, unthinking. Then he snatched a round object up in his mouth and ate it. Had a woody, funny taste from it. What was it called? The word came to him. It was called a nut.

It was an odd question for sure. What was this sensation of just . . . being?

It filled him with excitement to wonder, to think and contemplate his own mind.

He looked back to his past. He remembered the early days of his fleshy shell’s existence – it was small and fragile. He moved down this very path, to the place where his people lived. They weren’t enlightened with knowledge. They weren’t even privy to their own existence. He realised that he wasn’t like them anymore. He flexed his fins. Swimming deftly, he leaped from the water, snatching a fly from the air, and devouring it swiftly. It was a simpler time, away from this path of water and stone.

It was at that moment that he saw it. A behemoth of flesh and blood. It was hairy and stank of rot. It sat at the edge, with a spear in its hand, surrounded by finned corpses, not unlike his kin. It picked through the bodies, and on finding some amiss, chucked them over its shoulder.

He was repulsed by its disregard for life, and was consumed with fury. Moving quickly, he leaped up fast, much to the surprise of the sparsely-furred beast, sending it crashing. It flailed in the water, yelling, disorientated. He swam away triumphantly. But his mind froze. He felt something in his stomach drop and, while his body went back to that animalistic mind, his thoughts moved elsewhere. He was a little surprised.

He was swimming through unending darkness. A feeling of warmth appeared within his mind, which was his entire body at this point, filling him with peace. A powerful light appeared before him. A dappled light shone in the darkness, that the darkness cannot overcome. A voice spoke to him. “So, you have arrived. I thought that nut would never fall. You have my attention, young fry.”

“Who are you?” he said bewildered, despite never even knowing the spoken word, he liked the sound of this ‘voice’ he had obtained.

“Think, young fry. Who do you think I am? It may surprise you how much you know already,” the voice uttered.

And so, the fish thought. Almost immediately, his answer was there before him. “Gods, you’re Manannán Mac Lir, son of the ocean itself!”

This was amazing. Not only did he know who he was talking to, but he now knew everything. The voice changed, sounding kindlier, if chaotic, in tone. “Yes! You are He who I have chosen. I am sure you have many questions that need answering, young fry.”

There was a sound of deafening laughter as he faintly made out the sound of waves in the distance. Then the voice became tranquil, as it had become cheerful.

“So, you know what awaits you, don’t you?” said Manannán. He considered this, and realised what lay beyond for him. He responded bitterly, “Yes, my lord. I know exactly what awaits me.” There was a long, cold silence.

“I’m sorry, but you must understa-“ the god began, before he was cut off mid-sentence. The salmon screamed “My death? My death! MY DEATH AND CONSUMPTION BY A DISGUSTING APE IS WHAT AWAITS ME!”

Manannán Mac Lir gave him a hurt look. “Well, there’s this old poet named Finegas, who has been an ardent believer to the gods. So, I decided to reward him by giving him boundless knowledge. To have Finegas catch and eat a salmon, who has eaten from the Tree of Knowledge, thus passing on wisdom, and allowing him to create the most breathtaking poetry, that is worthy of the ears of the Daghda himself. And you are that salmon. Is it not an honour, to die for the gods?”

“I am not just a salmon anymore, my lord.” He spat the word out, “I am something far greater than men, kings and even you! For I am not a salmon, I am the Salmon of Knowledge, and I would rather have my knowledge taken away from me than to serve your will.”

The voice grew perturbed. “You were damned from the moment you ate the Nut of Knowledge. You leave me no choice. I shall bless the spear to never miss. It brings me no pleasure to do this, but I will make it sear your flesh if any resistance is shown. Do I make myself clear?”

The Salmon of Knowledge thought harder than any living thing should. Was there a way out? What must be done?

A spark of inspiration crackled in his mind. Why couldn’t he give the god something to think about? He responded. “Fine.”

The god bellowed, angrier than ever before. “INSOLENT WORM, YOUR DEATH WILL BE A . . .” The voice trailed off. “Could you say that again?”

He sighed a sigh of apparent resignation “Yes, you win, I’ll die for the sake of your precious poetry. But remember this, gods can only have power if they have the belief of the people. You’ve done well for yourself, changing names to suit the people. Maybe I should call you by your other names, Neptune? Poseidon? Sobek? Dagon? I know them all. I see six glowing lights of belief in the far future, but none of it goes to you. I will die, and my soul will be freed to do as it wishes with this gift of knowledge. You won’t die. You will feel your power dwindle and eventually fade, until nothing is left more than a mote of thought in the vast stream of the universe. Enjoy it while it lasts, m’Lord.”

The god was very uncomfortable with this. “Your lies go unheard. I would to see this first-hand, but I don’t need the gift that you have. It would be an insult to continue conversing with an entity as low as yourself, young fry. Go back. Your shell will soon reach Finegas. Die, give yourself to him, so the world may see the art of that poet.” And the voice gave a chilling laugh, like the breaking of waves.

He was thinking fast, with only seconds to live before the poet slaughtered him, slammed himself upon a large rock. He tried to close his eyes, but remembered he was a fish, and as such had no eyelids. He prepared himself, there was a ‘thunk’, the spear, a sharp pain in his side and, finally, death.

For a few seconds, he was in a black void, a sensation that was similar to falling. Suddenly he stopped and opened his eyes. Hang on, eyes? He blinked a few times to be sure. Wait . . . blinking? He couldn’t blink! What was happening?

He looked ahead. There was Fionn, who looked very unhappy, and Finegas, who was ecstatic. “Yes! I’ve found it! I don’t know how but I finally found it! Grahahaha!” Finegas tried to jump and click his heels together, but fell face-first into the river. It was only then he noticed it. The shiny, lifeless body was once his. He wasn’t sure how to feel.

After Finegas set up his hammock to sleep in while he waited for his meal, he beckoned to Fionn, commanding him to cook the fish. As Fionn set the fish on the spit, the Salmon looked on uneasily. It was disturbing to see his body being roasted. Fionn looked at the fish’s side, seeing a blister, rapidly growing. He seemed panicked. With desperation, Fionn reached out and popped the blister without thinking. Then, suddenly, as Fionn burnt himself and thrust his thumb in his mouth to lessen the pain, the Salmon felt himself being drawn towards him. The boy plucked his thumb from his mouth, examined it, and put it back. What happened next was very odd.

Fionn swore. “What in Balor’s name am I going to tell Finegas when he finds that I damaged his precious salmon?”

He then heard the most exasperated sigh he’d ever heard. “Nothing.”

Fionn flinched. What was that? “Hello?” he mumbled, filled with dread.

Fionn gasped, swallowing his terror at what he thought was one of the Fairy Folk or something worse. “Then what are you? A god? A fairy?” he whispered.

The voice sighed. “No boy, you’re alright. You’re the first human I have ever spoken to. It will serve you well to know who I am and what I can do.”

Fionn, who was curious about where this was going, and having minutes before the fish was cooked, sat down and obliged the voice. “Go on then.”

And the voice began.

When foolish gods fall to ash and dust, I, the Salmon, readjust.