1919: a slow-burning start to the War of Independence

Although there were few casualties, the year marked a point of no return and made a confrontation between the British state and the Irish counterstate inevitable 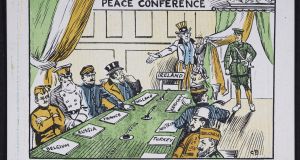 A cartoon depicting a uniformed Irish Volunteer (representing Ireland) being introduced to the Versailles Conference table by Uncle Sam. Other participants at the conference table are represented by stylised figures such as John Bull. Photograph: NLI

Every student of Irish history is taught that the War of Independence began on January 21st, 1919, with the ambush of a party escorting a cartload of gelignite to Soloheadbeg quarry in Co Tipperary.

This was not war as it had been experienced in the previous four years. There was no declaration of war, no recalls of ambassadors, no packed trains full of troops heading to the frontiers.

War was the last thing on the minds of the 26 elected members of the first Dáil attending the Mansion House that fateful afternoon. The sober and reflective tenor of proceedings intended to convey to the world that the underground republican government was serious about Ireland taking its place, to paraphrase Robert Emmet, among the nations of the Earth.

The shooting dead of constables James McDonnell and Patrick O’Donnell at Soloheadbeg horrified many of those present in the Mansion House, including Arthur Griffith, the founder of Sinn Féin. If such attacks continue, “we would soon be eating one another”, he suggested prophetically.

On that day, fraternal greetings from the members assembled were sent to the nations of the world and emissaries were selected to attend the post-war peace conference at Versailles.

The victorious allies, though, were not ready for this unilateral declaration of nationhood. The Irish failed to get a hearing at Versailles. The British were firmly hostile, the Americans did not care enough and the French were not inclined to cross Britain when hundreds of thousands of her finest fighting men had died in the liberation of France.

The War of Independence was a slow-burning conflict. About 17 people were killed in 1919. As the historian Michael Hopkinson pointed out in his book The Irish War of Independence: “The extremely limited and episodic nature of the hostilities during the rest of 1919 scarcely merits the term ‘war’.”

Dan Breen and Seán Treacy, the best-known perpetrators of the Soloheadbeg ambush, thought otherwise. Breen declared years later that the “only way to start a war is to shoot somebody”. In that respect, he may well have been right.

The year, though, marked a point of no return and made a confrontation between the British state and the Irish counterstate inevitable.

Both sides took measures which negated any attempts at compromise. Ten days after the Soloheadbeg shooting, the volunteer newspaper, An tÓglach, declared that every volunteer had a duty “to use all legitimate methods of warfare against the soldiers and policemen of the English usurper and to slay them if it is necessary to do so in order to overcome their resistance”.

In April, Dáil Éireann declared a boycott of the police. The deliberate shooting dead of District Inspector Michael Hunt in Thurles, Co Tipperary, on June 23rd, 1919, marked an escalation in hostilities.

In turn, the British used more repressive measures, proclaiming large parts of the country. In September 1919, the Dáil was outlawed by the British and a large number of nationalist organisations banned.

Separately, the British government’s Irish committee drew up plans for what became the Government of Ireland Act 1920. The proposal for two Home Rule parliaments, north and south, with a council of Ireland for matters of mutual interest, created partition.

The Unionist majority in the North accepted the eventual settlement with alacrity. The limited form of self-government for the south would never be acceptable to nationalist Ireland as the British suspected and would be replaced, only after a bloody conflict, with a more generous settlement in December 1921.

Speaking in the House of Commons just before Christmas in 1919, the British prime minister David Lloyd George promised that “any attempt at secession will be fought with the same determination, with the same resources, with the same resolve as the northern states of America put into the fight against the southern states. It is important that that should be known, not merely throughout the world, but in Ireland itself”.

Subsequent events would test that declaration to destruction. IRA headquarters in Dublin had been circumspect in 1919 about getting involved in a full-scale confrontation with the British, judging they had neither the wholehearted support of the people nor the arms.

By the end of 1919, the chief of staff Richard Mulcahy judged the IRA was ready and the new year brought an attack on Carrigtwohill barracks in Co Cork, the first of hundreds of such attacks which would make the countryside a no-go area for the Royal Irish Constabulary (RIC).

By April 1920, 300 RIC barracks had been burned to the ground, marking the retreat of British rule from what would become within two years the Irish Free State.

O’Rahilly house at risk after being damaged by vandalism
7