If certain processes are used when making decisions, chances of success go up 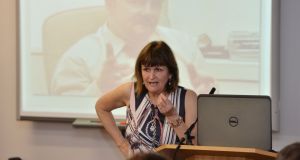 Learning what works in business is hard. So the big question is how do you improve the odds?

“What we do know from 40 years of research is that if certain processes are used when making decisions, the chances of success go right up,” says Prof Denise Rousseau.

One of the key factors organisational behaviour specialist Rousseau has identified as impairing management success is inherent bias in decision-making even when efforts are made to overcome it. This being so, she says managers and teams that engage in a conscious “bias-beating” process will ultimately make better decisions.

“All human being are biased in their thinking, their perspectives and the way they make judgments,” says Rousseau, who was in Dublin recently to speak at an event run jointly by Dublin City University’s Leadership and Talent Institute and The Irish Times.

“No matter how well trained we are to avoid biases based on prior beliefs or prior experience, individuals have a very hard time repairing their own biases.

“However, you and I can see the biases in each other and being aware of this makes it possible to de-bias decision-making. What we’ve learned from the research is that while people don’t necessarily learn to make better decisions as individuals as a result, they make better decisions as groups. So the idea of using a social process to improve the quality of the deliberation is really important rather than just relying on oneself.”

Rousseau, who is the H JHeinz II professor of organisational behaviour and public policy at Carnegie Mellon University’s Heinz College and the Tepper School of Business, identifies a number of key features present in all decision-making that managers need to be aware of if they want better outcomes.

First up, the blindingly obvious: solving the right problem.

“The first principle is to take time to search and ask questions. This is really important in organisations with leaders who think they know what’s going on whether they do or not. In this situation a lot of decisions come with the sponsor’s bias, and teams are asked to do things that may or may not be needed.”

Rousseau also confirms what many have long assumed that organisational decisions are usually political decisions as well.

“By politics, I mean looking at things from one stakeholder’s point of view. In organisations there are always informal factors that shape the way a decision is understood and that can be very misleading. If something is proposed by the accounting department it solves what the accountants think is important, but the marketing people are going to get screwed if they do it.

“So you need to ask what are the political implications of this decision? Who are the stakeholders, who benefits, who loses, how will the end-users be affected and what can we do to avoid negative politics where I win and you lose? Positive politics means finding a way of legitimising this decision so that more people benefit.

If there is one thing managers could do to improve their decision-making Rousseau says it is to consider more than one answer to a problem.

“We’re always tempted to go with the first solution but it’s really important to ask how else could the problem be solved. When more than one alternative is considered, the odds of success are better. Most decisions are made on some initial preferred choice that just carries forward, and is associated with less than satisfactory outcomes.”

“The short-term objective may be to make money or save money, and that’s fine. But, in addition, look for something that’s more long term such as capacity building. This matters because if you have multiple criteria you have the interests of more than one stakeholder being considered, more than one frame of reference to work with, and are less likely to make a biased decision.”

Rousseau also says that considering multiple sources of evidence before making a decision greatly improves its chances of success.

GET SMART ABOUT DECISION-MAKING

– consider more than one solution

– aim for win-win outcomes not win-lose

– consider more than one measure of success