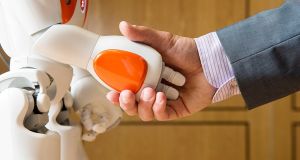 “Hello, give me your job.” Transportation and storage, manufacturing and retail roles are most likely to be automated, says report

Jobs will change rather than disappear over the next decade as robots are increasingly used in the world of work, a study says.

Up to a third of existing jobs could face automation by the early 2030s, but new Artificial Intelligence (AI) technologies could boost production and generate more jobs, PwC said.

Jobs in transportation and storage, manufacturing and retail are most likely to be automated, while the lowest risks are in education, health and social work, the report said.

John Hawksworth, chief economist at PwC, said: “A key driver of our industry-level estimates is the fact that manual and routine tasks are more susceptible to automation, while social skills are relatively less automatable.

“That said, no industry is entirely immune from future advances in robotics and AI.

“Automating more manual and repetitive tasks will eliminate some existing jobs, but could also enable some workers to focus on higher value, more rewarding and creative work, removing the monotony from our day jobs.