Wild Geese: ‘The depth of the wealth in West LA is phenomenal’ 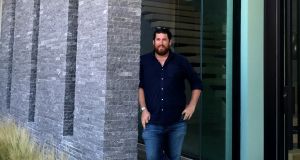 James Corr: “The numbers are astronomical If you think Dublin prices are high, come over here and I’ll show you.”

With an office in Santa Monica, Kilkenny man James Corr has become renowned for the quality of his company’s multimillion dollar housing development projects.

Developing and constructing homes for clients in an area that stretches from from Hollywood to west Hollywood, Beverly Hills to Bel Air it’s safe to say that quality and innovation are essential to a business which works with some of the best architects and the wealthiest clients in industry.

Corr studied a BSc in Construction Management and Engineering at Waterford Institute of Technology before heading to Los Angeles having graduated in 2005. His cousin, an architect in Orange County, put him in touch with a contact who was developing ocean-front homes at Laguna Beach.

“The first week was digging holes but, within about a year, I was running a couple of job sites for him,” says Corr. “I then decided to go out on my own and worked with some developer clients.

“An early house we worked on in the Bird Streets area of West Hollywood got a lot of attention in the media and was featured in books and magazines,” says Corr. “After that, the market crashed but we built the business all the way through that. Now we have homes of a very high calibre coming on stream every four to six months.”

Working at the high end of the market proved a buffer against the financial crash for Corr’s business.

“The depth of the wealth in West LA is phenomenal. There were a lot of people sitting on the sidelines so, when the market crashed, they realised it was a good time to get value for money. These are people outside the confines of the normal economy. They don’t need to get a bank loan to remodel their house.”

Corr Contemporary Homes, which he founded and where he is chief executive, has built and developed what Corr calls “nice homes” every year since the business was established – that is, homes in the region of between $3 and $20 million, with some projects being multiples of those figures.

“The numbers are astronomical,” says Corr. “If you think Dublin prices are high, come over here and I’ll show you.”

“A small house for us is 4,000 square foot and how much we spend on the construction alone is anywhere between $400 to $800 dollars per square foot. The homes are higher performing. They have to deal with a lot more – intense heat, earthquakes and so on.”

Being a young man starting out in business has been both a help and a hindrance to Corr.

“Americans have a very different attitude towards success,” he says. “They love to see a young guy trying to do something new, big and different and they support it where they can.

“Even at that, I’m probably an anomaly in my industry and I’ve to counter that. When I go in to bid for big projects I lose deals because I don’t have enough grey hair but, on the other hand, you get younger developers and clients who want to work with someone younger who is willing to do something different and is more aggressive, will meet tighter deadlines and try new things to make a different product that is that bit more cutting-edge.”

Building a reputation for his business has meant developing close relationships with both architects and clients.

“You have to maintain the quality of your work. The budgets are never enough but the quality of the work must satisfy the architect as they refer you on. You build relationships and then the architects know you that can perform and you build a body of work.”

Working closely with the client is also vital to the success of the business.

“You are building their dream home, often their final home. A lot of the time people are making decisions about things they’ve never considered before. You’re also dealing with designers who have very, very specific requirements and the quality has to be perfect, so the rate of production is not as high as it would be in a commercial setting,” he says.

As an Irishman working in the US, Corr says it is essential to understand the visa process and he advises anyone thinking of emigrating to the States to work in the construction sector to ensure that they both understand and account for the complexities, expense and, sometimes, the vagaries of the visa system.

“The biggest problem you face is the visa process; you are always planning for it,” says Corr. “It seems to be quite subjective, so the rules can change. One year I was stuck in Dublin and they felt that my capital investment in the business wasn’t high enough so I had to buy a forklift in order to meet that requirement. We bought the machinery and then my visa was granted.

“It’s tough. You are always dealing with the visa and it’s always in the back of your mind.

“My single biggest piece of advice is the visa. Make sure that you can get one. You need to have a handle on that before you get here.

“My second piece of advice is that, in our industry, you can forget about normal working hours. It’s a whole different world here in terms of work-life balance and people don’t pay trades half as well here. The market is structured quite differently to Ireland.”