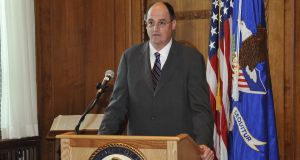 Tim Feighery: “All my children are Irish citizens also and the connection to Ireland is very strong among us”.

Although Tim Feighery was born in the US to Irish parents, he grew up in Tullamore in Co Offaly.

“My parents moved back to Ireland when I was very young and I went to primary and secondary school in Ireland,” he recalls.

“I often think about my education in Ireland even to this day. I owe a huge debt of gratitude to the Christian Brothers because the education I received from them far exceeded any I would have received in the US and that has been a huge influence in my life.

“I’ll give you an example. I remember one of the brothers saying to me when I was in 4th or 5th class, ‘you could be president of the United States one day’. Now, that may not have been realistic, but it was the willingness to look at the bigger picture, that stayed with me”.

However by the time Tim was 17, the family had returned to live in the US.

“My parents felt that in the late 1970s in Ireland, there just weren’t the opportunities for us that we would have in the United States and so we moved back to the New York suburb of Carmel and my father ran a pub called Fiddler’s Green.”

Feighery played for Offaly New York on his return and recalls one interesting match.

“It was 1980 or 1981 and I was playing for Offaly in Gaelic Park and all of the 15 people playing were from CBS Tullamore! There was a wave of immigration at the time. Freddy Laker airlines had a fare for £59 one-way which brought a lot of people over and there we were, 35,000 miles away from Tullamore, but 15 people playing in New York, all of whom had been to the same school”.

“My first job was in a firm called Kaye Scholer which was a New York law firm,” he saysd. “But they sent me to work in Brussels and I was there for three years.”

When Feighery returned to the US he worked in Washington DC but he was itching to leave private practice.

“An opportunity came up to return to Europe and work in Geneva on the UN Compensation Commission,” he said. “I worked on corporation claims for losses arising out of the Iraq’s 1990 invasion and occupation of Kuwait. It was a great time in my life as I got married during this time and we started our family.”

Mr Feighery’s next move back to the US was motivated very much by those affected by the 9/11 tragedy.

“The bar my father ran was a very local bar in suburban New York and most of the regulars were blue collar workers, policemen and firemen. I was very affected by 9/11 and I was very motivated to come back to the US to help out in some way.”

From 2003 to 2004, Feighery served as special master for the September 11th Victim Compensation Fund and presided over more than 90 hearings.

“It was very close to home for me because of the types of workers I knew from my father’s bar and because of the amount of Irish who were affected also,” says Feighery.

While it may seem like Feighery’s career has followed a carefully chosen career path, he sees it as directed more by knowing what he didn’t want to do.

“I really had no plan whatsoever! I think things come around though and my next position in the State Department’s office came about because of my connection to Ken Feinberg who I had worked with in Kaye Scholer,” he explains.

Feighery held a number of senior positions in the State Department where he was responsible for defending the United States’ interests internationally.

Feighery’s eight brothers and sisters all now live in the US. However, one sister has a house in Roscommon and he travels to Ireland regularly with his children.

“I have three children, Finbar is 18, Thomas is 16 and Anne is three. All my children are Irish citizens also and the connection to Ireland is very strong among us”.

In 2011, Feighery was appointed by president Obama as president of the United States Foreign Claims Settlement Commission.

“President Obama and the first lady were incredibly gracious people, wonderful people. I did think it was ironic, there we were, two men with connections to Offaly!”

“Yes it does bring my career to full circle being back in private practice again and I’ve been very happy here for the last four years.

“I should say that the other major influence in my life has been my mother Nancy Drumm. She is living in Carmel in New York still and my brother still runs the bar there which recently celebrated its 30-year anniversary.

“I usually watch the All-Ireland finals there every year and hopefully I’ll be there again to watch this September. Myself and my wife Sarah will be 20 years married this September also.”