My latest escape plan is an independent coffee shop

Jonathan Margolis: Coffee vans make a business. And if the location is wrong you move 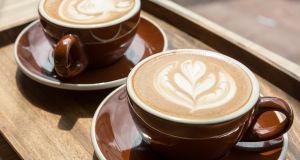 Opening a coffee shop is expensive. And if the location turns out to be a dud, you are stuck with it. Photograph: iStock

I saw the stress rush out of him like air from a balloon from his first day in the shop. So I always have a catering idea in development for when FT readers go off me. I have considered a bagel bar – “Tower of Bagel” – and a tea shop – “The Cake District”.

My latest escape plan is an independent coffee shop but, idyllic as they seem, they are tricky to get right. They fail if they are badly located. My dad’s second – in Shoreditch 40 years before Shoreditch “happened” – was a disaster. And opposite my office in west London is a heroically unsuccessful café.

In coffee, tiny things, such as failing to decorate coffees with “latte art”, also put people off.

Yet still the idea nags away. Recently I sat for two hours in a coffee shop, one of two new independents on the same parade. I counted 90 customers, and a further 70 buying a cup to go. Coffee sells at upwards of 90 per cent profit, according to my research.

Talking to people in the business last week, I discovered something of interest to the average barrister dreaming of a simpler life as a barista.

Tom Allen is a 34-year-old former professional rugby player and captain of Henley Hawks. Armed only with local fame and an unfinished engineering degree, he is now big in coffee vans.

His Flying Bean Café now has 23 employees, five vans, two station kiosks and has branched out into office catering. He still has time to collect his son from nursery.

“A bunch of us from school have dinner each year,” Mr Allen told me. “Most are in the City. When I bought a coffee van they looked at me a bit pityingly. Now they want to see the figures and are rather thoughtful.”

We were talking on the station platform at Beaconsfield, about 23 miles outside London, where we saw from an app on his iPhone that his nearby kiosk had taken £711.82 by 11am on a quiet August Tuesday. The vans had hit £1,037.59 in total.

“It’s taught me that a small business can be a pretty big business,” he said. “You can choose your own level of complication. One van can work. But I’ve got the taste and appetite to expand.”

Lou Scott, a 47-year-old former radio presenter, has a more cautionary coffee tale. She got into the game running a café in New Zealand.

When she came home to the UK in 2011, she started buying vans and trailers. She now has three mobile units, two in-house office stores and seven employees. Her Scotties Coffee turns over £380,000 annually but she is not maximising profits.

“I pay well. We work five days, finish early. And because I am devoted to coffee, I travel the world sourcing coffee from six weeks to three months a year,” she told me.

Such trips and a relaxed regime keep net profits low. Takings have fallen £2,500 a week in 2017, which she puts down partly to increased competition. “Everyone wants to do coffee now,” she said. “But I’d rather take a hit personally than cut staff or start making horrible coffee. I’ll change things a bit and we’ll be fine.”

She is also stressed out by the Brexit vote.

“Mainland Europeans worry they’re going to be thrown out of the UK,” she says. Job applicants from the EU have fallen from 120 per job to fewer than 10.

As for my ace-in-the-hole, I have seen too many friends break their hearts and budgets on doomed start-ups. So, based on what I learnt last week, coffee will remain my plan B. What do we think of “Mr Bean” as a name? – Copyright The Financial Times Limited 2017