Wild Geese: ‘Once you have it all figured out, life in LA is great’ 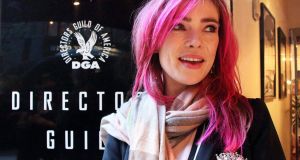 Moving to LA and becoming a movie director is the dream of many but reality for only a few. But Vittoria Colonna couldn’t resist the opportunity when it presented itself in 2013.

Originally from Wicklow, Colonna (36), who was born to an Irish mother and Italian father, started her career in performing and creative arts across Italy and Ireland before Hollywood came calling.

“I trained at the Gaiety School of Acting in Dublin and did a summer stint at Rada in London, studied fine art in Rome’s L’Accademia di Belle Arti and sang opera in Tuscany.

“It was only after doing a directing course at Filmbase in Dublin that I ‘fell’ into directing.”

Colonna started her foray into music videos in 2009 in Dublin.

“I kind of found my niche making videos for the likes of the Coronas and the Dirty Epics, picking up awards including the Irish Music Television Award in 2009 and best music video at the LA international film festival amongst others.”

Once she got the bug for directing, documentaries followed. Colonna’s debut feature documentary, Identities, which she wrote, directed and co-produced won numerous awards including the Rome Independent Film Festival award. In Ireland, she directed the Irish language film 4 Bhanrion (4 Queens), which aired on TG4 in 2013 and picked up Best Short Narrative at Moondance Film Festival.

In 2013, she was asked to travel to Los Angeles to make a movie about the basketball world via one of the LA Lakers owning partners. The project fell through, but she stayed on to direct her own short film Sandboy, for which she also wrote the screenplay. Sandboy picked up numerous awards and qualified for a 2015 Oscar nomination for short live action film.

That opened up further opportunities in the US. An agent and manager followed soon after.

“Until then, I had enjoyed many artistic endeavours but found it hard to master one so I became a Jacqueline of all trades, if you will. When I discovered film, I saw an opportunity to amalgamate my skills and multitask through the most powerful creative medium known.”

Colonna founded her own production company, Painted Films, in Los Angeles last year and is currently working on projects in both LA and worldwide.

The Wicklow native originally travelled to the US on an O-1 visa and received a green card in 2017. The O-1 non-immigrant visa is for people who, according to the US government possess “extraordinary ability in the sciences, arts, education, business, or athletics”, or who have a demonstrated record of “extraordinary achievement in the motion picture or television industry and has been recognised nationally or internationally for those achievements”.

“Because I had contracts in Los Angeles and work lined up, I was able to stay for the three years. The only thing is, as I was on the O-1 as a director, it’s the only job I could work in legally, so it was challenging.”

Colonna got her green card in 2017, after what she calls “an easy enough process”.

“Once you have a decent body of work, accolades and awards to show for yourself, you’re on a great footing, but the process has certainly gotten more difficult so I was very lucky to get it when I did.”

LA is a vibrant place, ever changing and ever experimenting, and Colonna says it embraced her all-round creativity. “I got involved in the healing community, circus troupes, performance and experimental arts. I also have access to an art studio in LA where I paint regularly.”

She says LA broadened her horizons and helped her get to know herself better. “Also you get some fun surprises. While training to be a Kundalini yoga teacher I realised – after six months of training – that I was actually sitting right behind Demi Moore all that time.”

Colonna is currently working on a project with the support of the Irish Film Board and Tilted Pictures and is directing a movie for television in the US this summer. “It’s a painstaking process. I always find it’s a case of ‘hurry up and wait’.

“The film industry is tough. By the time you have all the preparation done and you’re on the first day of shooting, you’re almost there, but many aspects need to come together first – from raising funds to legal issues to finding the right crew.”

She warns anyone thinking of moving to LA to have money – lots of it.

“The American dream doesn’t come cheap. I wished somebody warned me how expensive LA would be. As a legal alien, I found more and more loopholes and surprise expenses such as health insurances and immigration lawyer fees as well as high rents and general cost of living. Trying to establish good credit with the banks is also no walk in the park.”

In Los Angeles, you have to start from scratch, she adds. “In Ireland I had cultivated lots of great contacts, but, once I landed in LA, I needed to learn how to swim pretty quick. The talent pool here is massive, so you have to work hard to stand out. I didn’t know many people here so I had to figure out who was wasting my time and who wasn’t.

“But once you have it all figured out, life in LA is great – but it’s still a work in process,” she says.