With private offices all but history, we must hide behind plants and filing cabinets 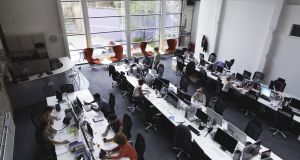 The battery life on the latest Apple MacBook Pro laptop is not bad. A British man on a stag do has swum across the Hoover Dam, and it is easier than you think to sit on a big inflated ball all day instead of a chair.

I did not intend to learn any of this. But I sit in an open-plan office, as I have for most of my working life, and these subjects are what my colleagues and I have been talking about this week.

When open-plan fans gush about the creative exchange of ideas unleashed when workers share a desk, I am fairly sure this is not what they have in mind. I am even more sure that a lot of my colleagues would swap their desks for an office with a door in an instant, especially if they sit near someone like me: easily distracted, sometimes loud and prone to pester people for a chat whenever I feel like it.

The dispiriting nature of the open-plan office has arisen, over canapés, at three events I attended in the past two weeks in London, where a surprisingly large number of organisations seem to be on the move. Bloomberg is shifting to a new building not far from the Bank of England. The US embassy is heading to a new home south of the river. And the FT is going north back to its old home of Bracken House near St Paul’s Cathedral.

A number of smaller companies are also upping sticks. And in almost every case I have come across, there has been a great deal of moaning about the number of individual offices being eliminated as part of the move.

“My employees are furious with me,” groaned one chief executive, whose company was about to lose private offices – including his own – in a move.

He had no intention of changing course, which makes him bang on trend. The open-plan office continues to spread doggedly, despite study after study suggesting it makes employees more miserable, more ill, less friendly and less productive.

Forget any hope of salvation. A mass return to the individual office is “highly unlikely”, according to Jungsoo Kim, a building environment researcher at Sydney university, because open-plan is so much cheaper.

A study he co-authored last year showed that office accommodation can be the second-highest cost after salaries for many companies, adding up to as much as $20,000 a year per workstation in cities such as London. Unsurprisingly, the average space allotted to each worker has plunged in the past 20 years.

So what to do? It seems only fair that if a company is determined to inflict this woe on its workers, it should observe some basic rules to help people survive open-plan life.

First, confine the boss to an office. The urge that some chief executives feel to sit among their minions is understandable. It allows closer surveillance of staff, gives the misleading impression of equality and has a number of prominent fans, including Facebook’s Mark Zuckerberg. But this regrettable fashion has spread far beyond Silicon Valley.

“I sit next to the customer service and social media teams,” blogged Pret A Manger’s chief executive, Clive Schlee, after his sandwich chain company moved address late last year to new digs without any individual offices. This may suit Mr Schlee. But what about everyone in customer service? Sitting within earshot of the boss requires inhuman levels of vigilance and only adds to stress levels already high enough in open offices.

Second, take extra care not to let under-performers have the best desks. Many open-plan designs still retain a few private offices for senior staff. Putting a loafer in one makes more diligent colleagues outside resentful and often encourages worse loafing.

Third, encourage staff to turn any available objects into makeshift ramparts. Filing cabinets, piles of reports and office plants – all should be deployed to dampen noise and deter the unwanted incursions that make it so hard for people to concentrate. This means dropping petty rules about clean desktops and anything else deterring such defences.

Finally, devote as much space as possible to refuges where all noise is outlawed and remember that when people come to work, there is one thing most of them really want to do: work. – Copyright The Financial Times Limited 2017