‘I found Dublin old-school because men dominate everything’ 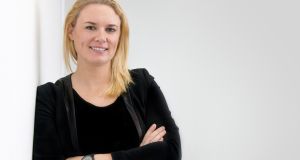 Alva Horgan: “I’d say push yourself to the limit and don’t think you can’t do what anybody else can do.”

Alva Horgan was working for Dillon Eustace in the IFSC when she decided to spend a year in Australia with her friends.

The Dublin woman was climbing the ladder in the corporate world after getting a degree in business management with law from Waterford Institute of Technology.

Studying at night to become a qualified chartered corporate specialist, Horgan worked in an accountancy firm before moving on to Anglo-Irish Bank.

It was while she was backpacking in Southeast Asia on her way to Australia that she decided to make her next career move.

“I fell in love with the countries I was visiting and I started thinking it would be interesting to see if there were any jobs.

“I got a call from PricewaterhouseCoopers in Singapore saying they were setting up a new business department,” she says. “I bought a suit and flew there for the interview in a big skyscraper.”

Horgan stayed with the company for three years, where she advised multinationals on how to set up a new company in Singapore.

“I started to win hundreds of thousands of dollars’ worth of business deals for the firm.

“I was then offered a job in Bangkok to be vice-president of sales in online start-up Hipflat, a property portal website. That job was great for me because I love the fast-paced growth stage of launching products and hitting targets,” she said.

A name change was one of her first hurdles. The traditional Irish spelling of her name “Ailbhe” was too difficult for her colleagues. “It started to annoy me because I found that people didn’t remember me, even senior partners, because they couldn’t remember my name.

“I changed my name to the phonetic spelling and people found it so much easier,” she said.

The 36 year old had been nursing an idea based around holiday resorts in Southeast Asia for several years. “My experience is that some resorts here in Thailand are not good about talking about themselves online, getting exposure or bookings online and that’s what my company, Resort Listing Asia, focuses on.

“We try and find the resorts run by Thai people, who are not very knowledgeable of the internet. I try and move their businesses online – which is where our tag ‘moving Asia online’ comes from.

Horgan is now based full-time in Bangkok. It’s a far cry from where she grew up in Rathfarnham.

“When Dundrum Town Centre was being built, I was working for Anglo Irish Bank at the time and they were one of the biggest lenders for the shopping centre.

“That’s the only shopping mall that’s big and prestigious in Ireland, whereas if you come to Bangkok, there are some of the biggest high-end shopping malls you’ll ever see,” she said.

Horgan now has four staff working full-time on Resort Listing Asia. Her next step is to bring her own version of Done Deal to South East Asia.

“I created a group on Facebook several years ago called Bangkok Buy Sell Swap, which has over 45,000 members. At home in Ireland, we would always have used Buy and Sell or Done Deal.

“In Asia, people always had the attitude of wanting to buy new or designer, but that second-hand trend is beginning to grow. I’m now in the middle of talking to investors about launching Just Simple Sell,” she said.

Horgan said there is huge potential for mobile phone and online penetration in Southeast Asia.

“In Thailand, there’s a population of 69 million and there’s probably a third who are online. There’s another 30 million who have to increase their spending power to move online,” she said.

It’s very important in the world of online start-ups to keep ahead of the trends, according to Horgan. She said this is one area where working in Southeast Asia is different to working at home in Ireland.

“I feel that in Ireland, people tend to sit on whatever job you have. When you come to Southeast Asia, you realise very quickly the number of intelligent Asians around you who have different knowledge to you,” she said.

“When I was at home in Dublin, I found it old-school because men dominate everything. Over here, I’ve found myself sitting in boardrooms with the top people in the industry. In Asia, they’re appointing women to senior roles, especially in Thailand and Singapore. Some of the head bosses in banks are women. You don’t see that in the western world as much,” she said.

Her experience mentoring women in the corporate world left Horgan frustrated at how women didn’t push themselves forward enough for promotions and higher salaries.

Resort Listing Asia is a business that Horgan describes as a female-led start-up, with only one male employee.

“If I was speaking to an ex-pat Irish girl, I’d say push yourself to the limit and don’t think you can’t do what anybody else can do.

“We come from a small country, and I’ve always believed I have to push myself forward – I’ve never thought I’m not as good as any man or Asian coming to do the same job,” she said.