Only a third of fathers avail of paternity leave 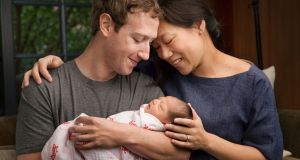 Facebook chief executive Mark Zuckerberg took two months’ paternity leave when his daughter Max was born, but many Irish fathers aren’t so lucky, despite the introduction of a new regime. Photograph: Mark Zuckerberg via AP

The majority of men who became fathers over the past year failed to avail of paternity benefit, new figures from the Department of Social Protection show.

According to the department, there were just 20,375 applications for the benefit, which is paid at a rate of €235 a week for two weeks of leave, in its first year of existence. However, with births running at an annual rate of about 60,000 across the Republic, this indicates that only a third of fathers are availing of the benefit.

The benefit, which was introduced last September, is available for up to 26 weeks after the child’s birth or adoption placement, and it is also available to same-sex couples.

“I would strongly urge all eligible parents to consider applying for paternity benefit when they take paternity leave. It is a precious time for new parents and the department recognises how important this stage of family life is for parents,” Minister for Social Protection Regina Doherty said.

The reasons for such a low take-up are likely to be diverse, with some fathers possibly feeling uncomfortable taking such a long period of time away from work.

For most others, perhaps, it comes down to economics. While some companies, including KPMG and Facebook, top up employees’ paternity benefit in much the same way as they top up maternity benefit, many others do not. This means that for many fathers the statutory payment of €235 a week does not make up for losing pay at what is already an expensive time.

However, as the scheme is not yet a year old, the expectation is that take-up will improve over time.