Careful with that axe, team 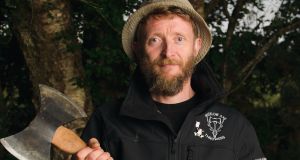 Heath Dawson of Firefox Bushcraft discovered the Irish appetite for axe-related activity when showing a group how to whittle wood to make spoons.

Axe throwing is not as wild and woolly as it sounds. In fact, it’s a disciplined activity that demands finesse and focus to do it right. There is no flinging of axes around willy-nilly. Your mission, should you choose to accept it, is to embed your axe in a comparatively small target (not dissimilar to an archery target) with a maximum point scoring bulls eye in the middle.

On this side of the world, axe throwing is an ancient Celtic sport. It also has a more sinister history as a weapon of war for foot soldiers in the Middle Ages.

It has long been popular in Canada and the Nordic countries and with outdoorsy types everywhere who wield an axe for a living and often show off their skills at timber sports events. However, its transformation into a pastime for the masses is being driven from the United States where axe-throwing alleys have started replacing disused bowling alleys in urban areas.

Axe throwing is very new to Ireland and one of those in the vanguard is Heath Dawson, founder of Firefox Bushcraft, who has been living here for the last 18 months.

His day job is teaching bush craft and survival skills (often to corporate groups) and he is also an instructor with the Bear Grylls Survival Academy in Ireland. “The more time people spend with technology the more that learning primitive skills outdoors seems to appeal to them,” he says.

Dawson discovered the Irish appetite for axe-related activity when showing a group how to whittle wood with an axe to make spoons. Talk turned to setting up an Irish axe throwing team and in June four members of this newly minted crew, who don’t even have a permanent range, competed in the world axe throwing championships against teams with pedigrees as long as your arm.

Three of the four finished in the top 20 (out of more than 100) and it could have been four out of four if the fourth team member hadn’t suffered a mishap. What has since come about is Axe Throwing Ireland, a business that provides tuition in the sport for both individuals and companies at Kilruddery House in Bray, Co Wicklow.

“We’re based at Kilruddery, but we can also travel to accommodate corporate clients with our mobile axe range,” Dawson says. “It takes about two hours to run an event and the cost starts at around €600 for a group of 20 or under. The sport is equally suitable for men and women because it’s not about strength. It’s more about timing, concentration and body movement.”

Asked why companies should include it in their repertoire of team-building events, Dawson says “because it produces surprises that upset the usual hierarchy. A latent talent for axe throwing often comes out in the most unlikely people. The team member least expected to show an aptitude for the sport turns out to have a hidden Viking within and this completely changes people’s attitudes towards them.

“As well as being a physical workout, it’s a great form of stress relief. We’ve found that people, especially men, are more inclined to chat about personal challenges when they’re outside in nature and participating in an activity like this. It’s also a great way to get outside and away from computer screens,” Dawson adds.

To get into the axe-throwing rhythm participants typically sample a range of axes from a hatchet right up to the professional double-headed Flying Angel. The axe is thrown at the target from a distance of 21 feet. “We find it is equally popular with guys and girls and it’s all about developing a focused aim and throwing rhythm. Women are extremely good at the sport as they are typically quite focused with precise aims,” Dawson says.

Irish-owned Asavie is one of Europe’s fastest-growing tech companies. It is also right up there when it comes to being open to fun ideas to keep its workforce engaged and amused. For example, the company has a rooftop garden where staff can relax and an in-house microbrewery run by employees.

Some Asavie employees have already sampled the challenges of axe throwing and the company’s vice-president for marketing, Hugh Carroll, is a big fan.

“We were first attracted by the novelty factor and because it looked like an interesting alternative to traditional types of outdoor corporate team building activity,” he says. “We also liked the fact that it is gender-neutral and outdoors and not something you can download.

“It’s very enjoyable and really brings people out of their shells. Because it’s so different it was by no means clear who would be good at it. In fact, the athletic types who normally excel in a sporting environment were not necessarily the best. This put people on a new footing with each other and changed perspectives within the team.”

Fancy a go? Theaxeclub.ie is running an introduction to axe throwing at the Kilruddery Farmer’s Market on August 26th and September 23rd between 10am and 3pm. It costs €25 for the 90-minute course or €5 for a “have a go” taster. Places are limited.

1 Should my mam wait for house prices to drop before buying?
2 Citigroup warns that markets are out of step with reality
3 US ‘hard seltzer’ drink White Claw launches in Ireland
4 Chris Johns: Past is another country when it comes to our post-pandemic future
5 If you injure yourself working from home, is your employer responsible?
6 ‘The recovery needs to be a full-scale economic renewal’
7 Joint accounts: if one of us dies, can the other access the money?
8 Donohoe told insurers they risked ‘irreparable damage’ to reputation
9 Small businesses are cannon fodder in zealous anti-virus experiment
10 ‘I’m so lucky to be in the Caribbean – a million miles from Derry Girls’
Real news has value SUBSCRIBE