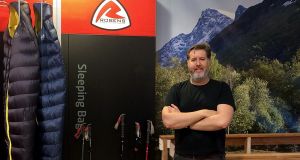 “I took old habits with me when I came here and found myself working late in the office but it is not something which is necessarily rewarded. The attitude is, ‘Why can’t you get your work done? Do we need to help you? What’s the problem?’.

“What I learned is that you don’t have to be the guy who always stays late or can’t say no. You guard your time and you become more serious about your work when you have to get things done in that space of time. The Danes are hugely efficient in what they have to do.”

Product designer Paul Fitzgerald works for Oase Outdoors in Denmark and lives in Aarhus with his wife Maria and two daughters.

He was recently recognised by the Institute of Designers in Ireland for his design of a soccer kit for the Afghanistan women’s national soccer team which includes a base layer with an integrated hijab as an integral part of the kit.

It has been called the first of its kind by various sports and football commentators as an integral part of a national football kit despite Fifa lifting the ban on hijabs in 2014.

Fitzgerald designed the kit for Danish sports apparel company Hummel where he worked for about a year. His current job as product designer for Oase Outdoors is to analyse the market for trends and translate them into new products for the company which produces a wide range of outdoor products.

Fitzgerald’s early life was spent in Tallaght in Dublin and nearby Templeogue. He attended Drimnagh Castle school for both primary and secondary level as his father had done before him.

Fitzgerald describes his family life as “disciplined, creative chaos”. His father is an engineer and his mother worked as a financial administrator for many years while also being a textile designer and a knitter for some of the leading knitwear designers in Ireland.

Without a solid grounding in art at secondary school, Fitzgerald initially took the portfolio preparation course in Ballyfermot College of Further Education – a course he says gave him “incredible grounding” and a place at the National College of Art and Design (NCAD).

“I bunked off school one day to go to the NCAD open day as the career guidance teacher didn’t really support the idea,” says Fitzgerald. “Once I went through the doors of Thomas Street, I knew that was where I wanted to go and I spent the next couple of years trying to convince the people around me that that was what I wanted to do.”

Fashion interested Fitzgerald from a sculptural point of view and he enjoyed the idea of creating something in 3D that was also functional. He graduated in 1999 and went to live in Spain with his then girlfriend, now wife, before returning to Ireland where he began working at Umbro in 2003.

“Working in Umbro was my first taste of design meeting commerciality and functionality, and it suited me because I have a passion for sport. To be able to bring my design sensibility into sportswear and its functionality was something I really enjoyed,” he says.

As head of design, he worked on everything from setting up an e-commerce website to designing collections and working on campaigns at point of sale.

Five or six years into his job at Umbro, he did a master’s degree in applied digital media at Griffith College four nights a week for two years which he describes as “tough going but a great learning curve”.

“The experience really helped polish my skill set to meet the demands and increased speed of product design and different platforms that products where being sold on. It gave me a great insight into e-commerce, digital media and how to think forward in terms of how people were starting to purchase items online.” Fitzgerald left Umbro in 2014.

“Hummel in Denmark wanted someone who understood clothing but also could live the passion for sports, football and sportswear. When the opportunity came up to try a better work-life balance in Denmark, we grabbed it,” he says. When they left for Denmark, the couple’s two girls were three years old and four months old.

Has the work-life balance he sought turned out to be the case?

“The Danes are at their desks by 7.55am each day, take a quick 15 or 30 minutes at lunch and work nonstop till 4pm. They are not hanging around looking to be seen or worried about being seen. They way they work is more full-on in a shorter space of time. It’s a concentrated workload and that’s how they achieve a work-life balance. They are also not afraid to say no.”

Fitzgerald’s two daughters and his wife now speak good Danish and he attends Danish classes two evenings a week to increase his skill levels. The family lives in Aarhaus, three and a half hours from Copenhagen, on the outskirts of the city in a large apartment.

His wife Maria worked initially at Aarhus University Hospital and is now studying for her PhD at the Centre for Neuroplasticity and Pain at Aalborg University.

Fitzgerald says that the couple have worked hard to get to where they are in Denmark, from learning the language to adopting different work practices and trying to get to know people.

“We have found the Danes we have met to be very helpful and welcoming. But we have also made an effort to get involved regarding the Danish culture and language. In general with the kids, schools, their classes and travel, we don’t have much personal social time. We try our best to get involved where we can,” he says.

The couple travel at least once a year to see family in both Spain and Ireland. “The kids are aware of their heritage. We try to educate them but we don’t push it on them. We are lucky with our families in that every visit home is usually well planned and fun-filled,” says Fitzgerald.

“Last time we were home during St Patrick’s week, which was great to experience with my kids and, for me, as a tourist in my own country.”

Fitzgerald’s advice for those thinking of looking at Denmark as a place to live and work is clear: “Do your research, expect to learn how to do things differently and be open to change as well as a new culture and language.”