Why successful women keep mum about their children

Pilita Clark: there has rarely been a time when so much is being done to improve the lot of working women 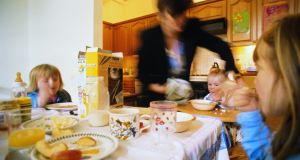 According to a 2005 Cornell University study, mothers could expect a deficit in average starting salaries compared to childless women

At a dinner in London not long ago, the chief executive of a very respectable organisation told a story that left her end of the table gobsmacked.

It went like this: she was in such a rush to leave work to pick up her children from school recently that she had to ask an underling for help on a minor chore. The underling was stunned, she said, because it turned out no one in the office knew she actually had children even though she had been running the place for years.

Then she said something I found more dismaying. She was thrilled to learn no one knew. She had made it a rule to never talk about her children at work on the grounds that being a mother was irrelevant and she never wanted people to think her family affected how she did her job.

The mothers could expect a deficit in average starting salaries compared to childless women, according to a 2005 Cornell University study. Yet fathers were likely to be offered $6,000 more than non-fathers, who were thought less committed to their jobs than dads

The first reason I found this astonishing was because, even though I am childless, I doubt I would ever have the willpower to shut up about such a central bit of home life.

I have bored my colleagues senseless with far less vital domestic news: the soul-sapping apartment move, The Great Kitchen Renovation Disaster, the bloke down the road who kept pinching our Sunday papers and returning them with the crosswords filled in.

I cannot imagine censoring children from such blather, and as I look around the office at mothers I have worked with for years I am glad I cannot see one who has kept noticeably quiet about her offspring.

Yet none of us was trying to be a top executive, as far as I know. If we were we might have thought again, because what really floored me about the story from that dinner was what it said about women in today’s workforce.

On the one hand there has rarely been another time when so much is being done by so many governments and companies to improve the lot of working women. In the UK businesses with 250 or more employees will be legally required to publish gender pay-gap figures from April next year, and the Aviva insurance group has just introduced six months of fully paid parental leave for its 16,000 UK workers, men and women.

The US may still be the only OECD country with no nationally guaranteed paid maternity leave, but it is also home to companies such as Salesforce, the $75 billion online software group that measures its gender pay gap and has spent nearly $3 million a year to close it.

There are signs that sexist hiring practices blamed for blocking female academics in the sciences have waned, as research suggests that US universities prefer women to identically qualified men in some fields.

On top of this, women are running everything from the International Monetary Fund to General Motors and Germany. Do they really need to worry whether anyone knows if they are mothers? Maybe not. Yet it is obvious why some still do.

One of the most arresting studies I have seen on this topic was done more than a decade ago in the US, where Cornell University researchers concocted fake resumes for equally qualified men and women, with and without children. They found mothers were not just a lot less likely to be hired than childless women, they could also expect $11,000 less in an average starting salary.

Yet fathers were likely to be offered $6,000 more than non-fathers, who were thought less committed to their jobs than dads.

In other words, it literally paid to have kids if you were a man and cost if you were a woman. I doubt this irksome motherhood penalty has completely vanished since then. But it is clear that things are changing.

Last week I spoke to Haruno Yoshida, the president of BT in Japan, a country with a woeful gender equality record. A few years ago, not long after she started at BT, she missed her daughter’s high school graduation because it fell on the same day as a big reception for top executives at the telecoms group. When she later told her British boss, expecting praise for putting work first, she got a “purple and screaming” reaction. “He said, ‘How dare you? You did something you can never take back’.”

That is partly a story of cultural differences. But it also suggests the world is moving on. Yoshida says she would never let a female employee do what she did, and as more companies are run by people like her, I like to think there will be a lot fewer workers who still feel the need to keep mum about being a mum. – Copyright The Financial Times Limited 2017