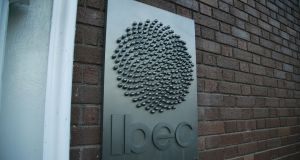 Business lobby group Ibec has rejected an assertion from the Irish Congress of Trade Unions that there has been “alarming growth” in precarious work in the economy.

Ibec director of employer relations Maeve McElwee said the body “disputes the statement that there is an alarming growth in precarious employment as set out in the Irish Congress of Trade Unions Report”.

“According to Eurostat’s definition of precarious employment Ireland has the 3rd lowest rate in the EU-15,” she said.

“With employment growth at 2.9 per cent in the first half of this year the clear trend has been towards full-time employment. The number of people part-time underemployed has reduced by 43 per cent since 2012 to the same level experienced in 2008.

“The number of temporary employees as a percentage of the workforce fell by 20 per cent from 2011 to 2016, with the number of people working variable hours at the lowest since 2000.”