Wild Geese: Football and PR, from Stillorgan to Bondi beach

Neil O’Sullivan: ‘I didn’t come here to do the Irish thing for two years and then just go home’ 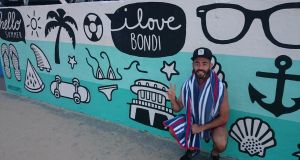 Neil O’Sullivan has packed a lot of living into the years since he moved to Australia.

“I left Ireland on New Year’s Eve 2011. It wasn’t just one thing. It was a combination,” he says. “I was 26, I’d worked with the Special Olympics for four years and I wondered if I wanted to do it for another four years, even though it was a huge part of my life.

“I was still living at home, I was single and I wondered if staying where I was was enough for me. I’d travelled around Europe and been to America, but I’d never been near Asia or the southern hemisphere, so I had a bit of wanderlust as well.”

Though he had qualifications in business studies and public relations, O’Sullivan’s experience playing football in the Leinster Senior League with Wayside Celtic and Mount Merrion was initially more useful when he arrived in Melbourne. (His dad, Eddie, is a former Shamrock Rovers player.)

“I played semi-pro when I got to Melbourne, for Langwarrin, through help from a friend I had at Wayside. So I am a big believer in the diaspora helping each other out,” O’Sullivan says.

While applying for jobs more suited to his professional skills, the Stillorgan man also coached football and tennis at a high school and worked in a jewellery store.

Eventually he got work at Oxfam through a Special Olympics connection. Being on a backpacker visa, he could only work there for six months and was on the verge of doing some farm work in order to get a second year-long visa when “I caught a break and got a sponsored for a full-time role with the Public Relations Institute of Australia (PRIA)”.

“The woman who hired me was part Irish and loved Irish people. I spent four years there, which really was my big break. Working for an industry body gives you so much exposure in the market here and I am good at making connections. It’s what my personality lends itself to.”

Working with PRIA, he moved up the corporate ladder to become national marketing and communication manager and moved to Sydney with his Australian partner, Su Tuttle.

“I’ve been here loving the life in Bondi beach ever since,” he says. “I didn’t just come here to do the Irish thing for two years and then just go home.”

O’Sullivan got Australian permanent residency in February 2016 and three months later moved to a new role as senior product marketing manager with CBS Interactive, the digital publishing arm of the US TV network.

But his career progression took on another tangent when he and Tuttle, who is a nutritionist, set up Nimbus & Co, an infrared sauna studio (a traditional sauna uses convection and conduction to heat the surface of a person’s skin, while infrared saunas use heating panels that emit light and give off radiated heat). They also offer yoga, meditation and acupuncture.

“Su and I are both entrepreneurial and we had lots of ideas, but this was the one that stuck. We felt that nobody in Australia was offering infrared sauna in terms of a lifestyle product.”

O’Sullivan says there are a lot of differences in business practices between Ireland and Australia.

“On face value we are very similar with language and culture but, if you scratch below the surface, we’re very different, and I think it’s the same in the business world. For example, in Ireland, if you wanted to go to the dentist you had to take time off, or if you were sick, your boss would be breathing over you the next day saying ‘what’s wrong with you’. But in Australia they have a much more relaxed environment when it comes to professionalism. They put more trust in people to do the job they’re paid to do. It has often been said to me that once you get the work done, that’s all we want.”

Like many Irish people who move to Australia, one particular aspect of the parks astonished him. “I couldn’t believe there were public barbecues here. If you had a public barbecue in Ireland the food would be last thing you’d put near it. It’d be destroyed.”

Another public convenience also gets O’Sullivan’s seal of approval. “There’s toilet paper in every public toilet I’ve ever been to in Australia. You don’t even have to think about that. There is a level of respect [for public property] in Australia that Irish people don’t have.”

Along with his very busy work schedule and still playing soccer at a relatively high level, O’Sullivan also volunteers for two mental health charity events – the Darkness into Light 5km walk (a global event run by Pieta House, the Irish suicide and self-harm crisis centre), and the Light Ball, which raises money for mental health organisations.

“I was part of the first committee to run the event in Sydney three years ago. As a sufferer of mental health issues myself, I get strength from working with these groups,” he says.