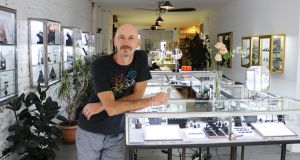 When Michael Fitzgerald first came to New York 21 years ago, he didn’t give the Big Apple much of a chance.

“I had studied jewellery design at NCAD and ran a successful business with a couple of other jewellers on George’s Street while throwing myself into Dublin’s nightlife with great enthusiasm,” he recalls.

“It was 1996 and Dublin was an amazing place. But I thought I’d extend my horizons and try New York on a six month holiday visa. I had been to the World Cup in 1994 and loved NYC,” he says.

Where better than New York to kick start a career in this industry?

At the time, New York was a much more accessible place for artists and low-income earners. “I was sharing a 2,000sq ft loft in Brooklyn with some other students from NCAD. Needless to say, you wouldn’t get a deal like that now.”

New York was just recovering from the ravages of a crack epidemic, which was rampant during the 1980s, so there were cheap rental opportunities across the city.

“I was going back and forth to Dublin for a couple of years, until a six-month stint at home cured me of any homesickness and I decided to move to New York for good.”

Fitzgerald says he found work as a sculptor’s assistant and learned to weld metal after he first arrived. “It was great but, after a few years, I wanted to get back into making jewellery so I got a small studio in Dumbo just under the Brooklyn Bridge.”

It was here that he met his wife, also a jewellery maker, with whom he now runs his business. Fitzgerald Jewelry was founded by Fitzgerald and his wife Hiroyo, originally from Japan, as a small studio and workshop in 2001.

The couple generated a buzz around their unique rings early on, propelled by an endorsement from New York magazine which said they offered the best wedding and engagement ring jewellery for any budget.

The rent is ridiculous, but we’re doing great, hiring four staff in total

“I also opened a school as part of the business where I taught ring making, stone setting and casting,” he says.

“We started to employ people and, in 2009, we opened our first ground floor space in Williamsburg, converting an old button factory into a workshop and gallery combined.” The gallery quickly established itself and grew so big, that a larger venue was required in 2015.

“The new gallery space in Williamsburg is filled with one-of-a-kind jewellery made by both my wife and I, as well as other local jewellery designers,” he says. “The rent is ridiculous, but we’re doing great, hiring four staff in total – including a head jeweller and administrators. My wife, designs and makes most of the jewellery, while I’m spending more time running the business.”

Fitzgerald says he works six days a week, but also finds the time to hang out with his 14-year-old daughter.

“I guess you could say, I’ve made it. I run a really successful business in New York, I have clients on all five continents – from Ireland to the Australian outback – and I hire staff from around the world. I’m really busy, but if it’s your own company it doesn’t feel like work.”

However, he says, life is expensive and he can’t afford to stand still.

“We’re lucky enough to have bought our own apartment in Queens and I cycle to work every day. Real estate is at a premium here and we couldn’t afford to live in Brooklyn, let alone Manhattan, which has become the enclave of the super rich.”

Rents on the Lower East Side start from €2,000-€2,500 a month for a studio, he says, while in Brooklyn you pay around €800 upwards for a room in a shared house. “In certain parts, you can get a two-bed flat for €1,800 if you’re lucky which, as it turns out, is not much more expensive than Dublin.

“Like any other city, New York has been gentrified and has lost its edge, but in return it’s a much safer, albeit more expensive place.

“If anyone is thinking of coming to live in New York and work in jewellery design, do. The luxury goods market is doing extremely well, so there’s lots of work within the industry and you will find opportunities,” Fitzgerald says.

He adds that his company is also very open to hiring Irish people for paid internships.

“Where better than New York to kick start a career in this industry? It’s a huge hub for diamonds – all the diamonds we get come from midtown Manhattan where we have excellent suppliers and contacts. We deal in precious diamonds and stones, which are ethically sourced.”

Fitzgerald is still operating on an “outstanding artists visa” – also known as the O-1 visa – it is available to people of “extraordinary ability” who excel in the arts and entertainment, athletics, sciences, business and education. “The green card application process takes years, so I’ve been lucky to be able to live and work here.”

The worst part of being away is missing family and friends in Ireland, Fitzgerald says.

“Like many expats, my wife and I spend all our holiday time going home, rarely visiting other places. I guess it’s sad that I don’t know my friends’ kids at all and miss seeing them grow up.”

Beyond that, life is good in the US. “New York is and always will be an amazing place to live and we feel very lucky to be here.”