What do people really want from their employers? 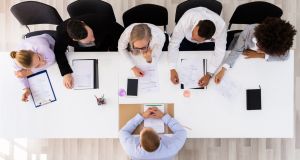 ‘People have definitely become very conscious of values and organisational culture over the last 12-18 months and will start asking questions about it from the very first interview.’ Photograph: iStock

Last week’s headline news that Dublin’s labour market is now as tight as central London’s will come as no surprise to those struggling to fill positions in their organisations. There is high demand for suitably qualified people in the finance, skilled construction (architects, surveyors and civil engineers), information technology and health sectors. And with a number of multinationals now citing staffing problems as the biggest obstacle to expansion, the perennial challenge is finding out what makes the difference when it comes to getting people to say “yes”.

Contrary to popular belief, it’s not all about the money.

In July international jobs and recruitment site Glassdoor, which relies on employees worldwide to share frank information about their working lives and employers, published a study about what drives employee satisfaction. The study looked at five markets – the US, France, Germany, the UK and Canada – and discovered that what matters to people was similar in each of the countries examined.

The three factors that rose to the top in all geographies were:

– the culture and values of the organisation;
– the quality of senior leadership, and;
– access to career opportunities.

The factors that were the least important predictors of employee satisfaction were, in descending order: work-life balance; compensation and benefits; and the business outlook of the organisation.

“A common misperception among many employers today is that pay and work-life balance are among the top factors driving employee satisfaction in organisations. We find little support for this notion in Glassdoor data,” says the study’s co-author and Glassdoor’s chief economist, Andrew Chamberlain.

“Instead the data from millions of employee reviews from around the world show that culture and values of organisations, the quality of senior leadership teams and career opportunities matter far more than pay or work-life balance for the long-term satisfaction of employees.

“Employers looking to improve workplace culture should place the highest priority on these three aspects of work.”

The study notes that, while these top three factors remain consistent across all industries, there are some variations depending on sector – with the most marked being among those working in government, non-profits and education. For example, those employed by the State are less likely to prioritise work-life balance probably because there are already measures in place, such as flexible working, that make it possible.

The only other variation at the top was in Germany, where workers prioritised the quality of senior leadership over organisational culture and values. Looking at the lower end of the table, compensation, benefits and work-life balance only mattered to 12-13 per cent of workers, whereas culture and values were consistently rated in importance at above 20 per cent.

Sarah Kelly, partner with the Panel search and selection, broadly agrees that the Glassdoor findings also apply in an Irish context and says that company values, leadership and career progression opportunities generally top people’s lists. However, in her experience, there is one exception. There is more emphasis on work-life balance here than seems to be the case in the other countries covered by the Glassdoor research.

“Values and leadership are definitely right up there, but work-life balance ranks a lot higher with the people I see,” she says. “I work a lot with transactional lawyers, for whom very long hours are the norm because of the nature of their work. But even the most traditional law firms are now recognising that more agile working options, where people can do a day from home, for example, are becoming increasingly important in attracting and retaining staff.

“People have definitely become very conscious of values and organisational culture over the last 12-18 months and will start asking questions about it from the very first interview,” Kelly adds. “Equally, they want to see that it starts at the top with transparent leadership and moves down the organisation to line managers.

“Of course, you never know what the culture is really like until you start working in it, but people are definitely trying to understand things like the organisation’s integrity, attitudes and reputation as best they can before they join it.

Kelly says companies lose staff for many different reasons, including toxic cultures, personality clashes, because they’ve reached a career dead end or because they’ve put in a big effort and it hasn’t been recognised. They will also leave if they don’t feel comfortable with the organisation’s values and, in the current climate, this may mean something like not being committed to diversity and inclusion.

Asked what typically makes high achievers move on, Kelly says it’s often down to not being thorough about the initial “onboarding” process and assuming that it’s “just” a task for HR whereas it should include buy-in from everyone on the team they’re joining.

They are also likely to leave if they feel the organisation is not willing to invest in them through training and career development opportunities while feedback, or the lack of it, is a key issue for the millennial cohort, who typically prefer short cycle appraisal to annual performance reviews.

Kelly says perks per se are not that important to job hunters at the moment, but that working for companies that demonstrate a commitment to mental and physical wellness has become increasingly important.