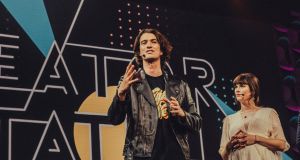 Any attempt by WeWork to oust Adam Neumann, above, could backfire: his shares carry 10 times the voting rights of other investors. File photograph: Cole Wilson/The New York Times

SoftBank has lost faith in Adam Neumann’s ability to lead WeWork and is expected to call for a board meeting to demote him as early as this week, after the lossmaking property group shelved its initial public offering and the chief executive’s volatile behaviour and drug use came to light.

Mr Neumann’s outsized influence over the company has become one of the biggest hurdles in the path of a multibillion-dollar IPO, according to investors and people briefed on the matter.

SoftBank’s vice-chairman Ron Fischer sits on the WeWork board, as does Mark Schwartz, a former board member at the Japanese telecoms-to-technology group. It was unclear, however, whether a majority of the board members believed Mr Neumann should step down as chief executive.

The board could decide against changing the CEO role in the end, these people cautioned, and either rally around Mr Neumann or hire a new executive chairman to oversee the company’s management.

Any attempt to oust Mr Neumann could backfire. Mr Neumann’s shares carry 10 times the voting rights of other investors and he has the ability to replace a number of the members on the board. Three of the seven board members were appointed by WeWork investors, including the SoftBank Vision Fund, Benchmark Capital and Hony Capital.

Opposition from SoftBank, in particular, could complicate Mr Neumann’s position and would represent a striking rift in a relationship the CEO has credited with having driven the company’s ambitions. Masayoshi Son’s Japanese group has been the largest single investor in WeWork to date, pumping nearly $11 billion into the group, and remains a potential future source of private capital amid public market scepticism.

Any change to Mr Neumann’s role would mark another volte-face on WeWork’s corporate governance. When the company first published documentation for its planned initial public offering, it said Mr Neumann’s shares would carry 20 times the votes of ordinary shares, his wife would have a say in picking his successor should he die, and WeWork’s board would include no women.

Investor hostility forced the company to reverse each of those plans, cutting Mr Neumann’s voting rights to 10 times, removing his wife from succession decisions and adding Frances Frei, a former Uber director, to the board.

The Wall Street Journal reported earlier on Sunday that some WeWork board members were pushing Mr Neumann to step down.

The group has faced a tumultuous few weeks after it revealed its plans to go public. The valuation of the group was expected to be dramatically slashed in the IPO, after bankers at JPMorgan Chase and Goldman Sachs received a lacklustre response from investors. Advisers were expecting the IPO to give WeWork a valuation as low as $15 billion, less than a third of the $47 billion valuation the company set in a SoftBank funding round this year.

News of Mr Neumann’s use of marijuana on the company’s Gulfstream G650 jet, record of tequila-fuelled company parties, and erratic behaviour have raised new issues for the investing public as well as the WeWork board.

Mr Neumann told employees last week that he had been “humbled” by the IPO process and that while he believed he knew how to run a private company, he had since received feedback on the role he needed to play as a leader of a soon-to-be public group. – Copyright The Financial Times Limited 2019