‘We were totally won over by the views over the forest’ 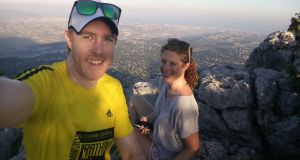 Andrew Cromien and Lorna Lee in Vence, France. “We decided to create something for people who love the sea, the mountains and outdoor activities and sports,” says Lee.

“We decided to create something for people who love the sea, the mountains and outdoor activities and sports. Likeminded people would be a good fit for us.”

Lorna Lee is explaining what exactly inspired her and partner Andrew Cromien to sell up in Ireland and buy an uninhabited restoration project in the south of France.

“I’d done a start your own business course with the local enterprise office in Dublin,” Lee says. “Using those skills, we were able to write up a business plan and do financial projections. On the back of those, we decided it was worth coming over here to the Cote D’Azur and doing some more research and looking at properties to see if we could find something that we could afford and would suit our needs.”

The couple began their search for the ideal property two years ago but the seed for this particular area was planted back in 2010 when Cromien trained in the area in preparation for Ironman Nice, one of France’s long distance triathlon events.

“The cycling is one of the things that drew me here,” confesses Cromien. “The Ironman Nice cycle course actually goes through Vence. A lot of the professional teams would be based out of Monaco and they train up on these roads.”

Plumping for an unoccupied villa in the town of Vence, there was much work to be done – wiring, plumbing, plastering and adding en-suite bathrooms to the four guest rooms.

“It’s a 10 minute walk from the town centre built into a steep mountain side, looking into a forested valley.” Says Lee, “We were totally won over by the views over the forest, the fact that you could walk everywhere and also drive down to the airport or the seaside in 25 minutes.

“We registered the business in October last. They actually have a good scheme here that we’re under, a scheme called Micro Enterprise for Small Businesses. It’s a simplified tax and social security scheme. It makes the administrative steps a lot less complicated.”

“On the face of it, we are a bed and breakfast,” explains Cromien. “What we are really focusing on is getting groups of hillwalkers, cyclists and people who are, sort of, coming here to make use of our house as a base to explore.”

The winter months gave Lee and Cromien ample time to explore the surrounding area with the goal of researching six hikes that they could recommend to walking groups and plenty of cycle routes of all distances to also have to hand. They’ve created a package for walkers and an Ironman training package for triathletes who want to train around the actual course or just want to put in some extra miles away from home.

For former service engineer Cromien, the language barrier has required a little extra work but, for Lee, who’d previously worked in Paris, in marketing and communications, the transition was rather smooth.

“Lorna’s French is pretty much perfect and gets complimented on every day. Mine is not quite perfect but it’s getting there slowly. I actually do classes in the local cultural centre. They have classes on twice a week which are very inexpensive. It’s also a good way for us to meet people.”

The whole experience has gone relatively smoothly so far for Lee and Cromien and they confess they don’t miss home back in Dublin and Greystones, respectively.

Lee feels she has the key to why they’ve been so relaxed about the move abroad.

“We didn’t think too long and hard about it. We’d obviously put a lot of research and consideration into it but it was over the space of quite a short time. It’s not something that we built up in our heads over the space of 10 or 20 years.

“There wasn’t a big risk of it maybe being a disappointment when we got here. We, kind of, just got on with it and took the risk, and said, if it didn’t work out, we have a fall back plan. We didn’t have too many expectations. We really hoped it would work out like we wanted but if it didn’t, it didn’t.”

With the guest house now up and running, Villa Rocamar has already welcomed its first groups of guests and, to their relief, they’ve had no Fawlty Towers moments. It’s all been smooth sailing – a huge turnaround for a project that only started with a cheap recce flight two years ago.

“As humans, we have a tendency to look at all the things that we have left to do, the garden and things like that, and not think about what we’ve achieved so far,” Lee says. “It takes friends and family and sometimes even customers saying, ‘you’ve achieved an amazing amount in the last year’, for us to stand back and feel proud of it.

It’s those days that we have a day off and we go off to do some research and we find ourselves up a mountain with these amazing views over the Mediterranean and the villages, on a Wednesday when other people are sitting in an office. That’s what we would have been doing ourselves a year ago. That’s when we really think, ‘this is it; this was worth it’, and we definitely wouldn’t go back.”