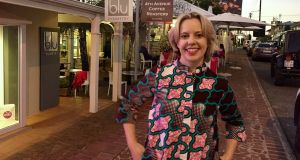 Aisling Quirke was bitten by the travel bug after spending time in Konstanz, Germany, on a government scholarship while still at secondary school. She returned there while studying her degree in history and German at Trinity and, in 1999, left Ireland to pursue a masters in business at ESCP-EAP European School of Management in Oxford/Paris.

“I decided that working in an international organisation, where I could understand the drivers of economic and social development, would be a good fit.” As part of her masters degree, she did an internship at the International Trade Centre in Geneva, and went on to work at DG Enterprise at the European Commission in Luxembourg.

“I spent three fantastic years in Luxembourg working on innovation policy in the countries of central and eastern Europe that were to join the EU a few years later. This involved travelling to represent the Commission at government meetings across the region.”

Quirke’s experience at the Commission proved invaluable for her next role at the World Bank in Paris.

“It was during these two years that I first visited Africa. My short stint in Ethiopia was also a turning point in my career. I saw that the private sector, not the aid industry, was driving transformation and decided that I wanted a career that had a lasting and sustainable impact on development.”

Quirke, who is originally from Wexford, left the World Bank in 2005 to pursue an MBA at London Business School.

“I had the privilege to meet and work for Mo Ibrahim, founder of Celtel (now Bharti Airtel), and the man who brought mobile phones to Africa. Mo’s impact on the Continent convinced me that business, if correctly leveraged, can have the most meaningful impact on economies and societies.”

Quirke moved to South Africa in 2009 to take up a role for AstraZeneca Pharmaceuticals. After launching a new access-to-medicines programme to make breast cancer treatment available to low-income women in Kenya, she decided to move back to Ireland in 2011 to work with biotech company, Elan.

“It was great to be home but my heart was in Africa and I decided to move back in 2012. By then, I’d met a South African man who I married in 2016. A friend from business school called me about a role at Barclays in Johannesburg. That was the start of my current role.”

Quirke leads a sales team called Global Development Organisations for Barclays Africa, soon to be rebranded Absa Group. It helps humanitarian and development organisations to get aid to where it is needed, in a transparent and secure manner.

“The most challenging leg of the payment flow is getting aid to the unbanked beneficiaries in remote locations. This is where mobile technology, blockchain and innovative partnerships come into play and, for me, represents where fintech and banks can have a massive impact on how aid is spent. Irish company AID:Tech is doing some really interesting things in this space.”

Based in South Africa, Quirke’s role takes her all over Africa, as well as Europe and North America, where most clients have headquarters.

“The biggest difference between working in Ireland and in South Africa, is the emphasis on race,” she says. The South African corporate sector is under considerable pressure to transform its workforce, so race features in everything from hiring to promotions, internal and external opportunities, and day-to-day conversation.

A high unemployment rate and affirmative action to transform the workplace and obtain work visas make South Africa a challenging market in which to find employment. Corporate roles are particularly tough, unless employees are hired and seconded from abroad. Nevertheless, there continues to be a shortage of critical skills in the market.

“Entrepreneurial pursuits, particularly in fintech, present the most exciting and flexible entry point for new immigrants into South Africa and Africa more broadly,” the Wexford woman says. “Technology is the future and cities like Cape Town and Nairobi are already world-class innovation hubs, attracting entrepreneurs and investors from all over the world.”

Quirke suggests that Irish graduates have a strong competitive advantage in the technology space, attracting considerable interest in Africa.

“We organise networking events for members, both Irish and African, and will be holding a fintech breakfast later this year. I’m also part of the London Business School Alumni Association, which is where I met my South African husband.”

South Africans enjoy a good time, and the braai, (barbeque), is the South African equivalent of the pub. Family is important and, given the challenges of the labour market, many South African families have family abroad. Therefore, South Africans understand emigration and are extremely welcoming towards foreigners who move there.

Married to an entrepreneur, Quirke’s ideal future would also be entrepreneurial and include investing in fintech companies with an economic and social impact, while living on a wine farm outside Cape Town.

“I like to dream and be part of realising dreams, and South Africa is a wonderful place to do just that – with a chilled glass of sparkling wine in hand.”