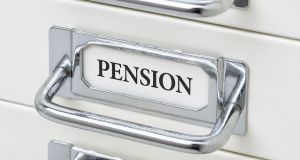 Employers are committed to retaining defined benefit (DB), or final salary, pension schemes, according to a new survey from the Irish Association of Pension Funds (IAPF).

However, most are closed to new members and more than one in three is not allowing members accrue further benefits. Figures from the IAPF survey of 60 member companies – mostly in the private sector – with 60,000 members and €20 billion in aggregate assets state that only 6 per cent have fully wound up their DB schemes, with a further 2 per cent considering such a move.

Where companies close access to new members or future accruals, they are largely putting a defined contribution (DC) model in place, under which the ultimate pension depends on the size of contributions made and the investment performance of the funds.

In such cases, almost 40 per cent of employers are making fixed rate contributions to the new schemes, with another 44 per cent opting to match employee contributions within certain parameters.

Where fixed contribution rates apply, 42 per cent of companies offer a maximum employer payment of between 10 and 15 per cent of salary. However, one in 20 is offering no more than 5 per cent.

In the case of matching contributions, 45 per cent of employers offer to match up to between 8 and 10 per cent, with a further 23 per cent going further, to 10-15 per cent.

The survey also showed that members switching to company DC scheme are benefiting from higher employer contribution rates than new members to the same schemes.

“While the migration from the much-coveted defined benefit scheme over the last few years has been difficult for many employees, our survey has revealed that those employers who have replaced the DB pension structure with a DC structure are making relatively generous contributions into those schemes on behalf of employees,” said Jerry Moriarty, chief executive of the IAPF.

“A greater focus on the contributions being paid to DC schemes should increase the chances of those members enjoying an adequate income in retirement,” he said.

The survey showed also that almost two-thirds of companies have acted to derisk their pension fund investment strategy.

1 Fianna Fáil may have just pressed the pause button on the property market
2 Who are Ireland’s 17 billionaires?
3 Saudi prince’s WhatsApp account ‘directly involved’ in Bezos hack
4 Corporate tax change is inevitable, says Donohoe
5 Irish organisations struggle to comply fully with GDPR
6 New blow for Ted Baker as accounting scandal doubles in size
7 My father in a nursing home wants to gift me his house
8 European investor acquires Harcourt Road offices for €55m
9 Are there annual limits on inheritances or gifts to a child?
10 Dublin 11 industrial land with scope for 600 homes seeks €6.5m
Real news has value SUBSCRIBE