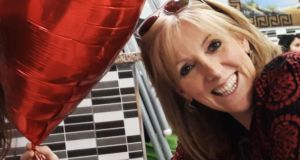 Niamh Stack: ‘I still haven’t bought the kids’ uniforms in case they don’t go back’

Having previously travelled the world as a flight attendant and designed hats in Kerry, Niamh Stack has made Madrid her home with her family of seven.

Stack, originally from Killarney, studied banking and insurance at the Cork College of Commerce in the late 1980s, before taking up a job at the ill-fated PMPA insurance.

“Cork was an amazing place to be in the late 1980s and early 1990s. Michael Jackson came there. So did Nirvana. There were great clubs and nightlife. It was a great vibe.”

But Stack had itchy feet so she got a job with Ryanair in Dublin in 1992.

“At the time they only had a few routes to the UK, and I worked in the office for a year.” It was short, but it gave her an introduction into life in the skies.

When Virgin Atlantic Cityjet started operating a business-class flight between Dublin and London City airport, Stack was on the plane as an air stewardess. “It was a fantastic service. People would get Champagne and hot towels before take-off. It was a different experience than it is now.”

After two years she spread her wings and started working for BA in 1995, first out of Gatwick Airport, then out of Heathrow.

“It was an incredible time to fly. I was doing long-haul routes, often going on seven to 10 day trips. We’d fly to Antigua and then lie on a beach for seven days, then fly home. It was just before mass tourism and low-cost flying changed aviation for ever.”

Stack commuted at first, but moved to the UK in 1996, living in Guildford in Surrey. “It’s nice and leafy but has easy access to London for a night out. There were lots of Irish girls commuting, but I was happy to live in London during that time.”

Stack says she worked mostly in business or first class and particularly enjoyed an occasion when Jude Law took over on-board service, much to the joy of travellers in coach. On another occasion, the late Princess Diana was travelling home from Antigua.

“The upstairs of the 747s were often economy, while first class was up the front. She sat upstairs, and I was looking after her and the boys. Upon seeing her, paying guests in first class wanted to swap seats but she insisted upon staying. She didn’t want the boys to think life was that simple. So after chatting to guests and having dinner, she settled them across the three economy seats and she lay on the floor below. She flew with us regularly. People just loved her.”

Stack says she stopped flying when she was pregnant with her first child and had an emergency landing into Heathrow – her second in total. “Overhead lockers flew open and that sort of thing.”

She moved back to Killarney in 2004 to look after her dad and have three more children– all boys.

“I really wanted to do something creative and founded Hy Brazil Creations designing hats and jewellery. I was very busy with all the horse-racing events taking place across Ireland designing huge hats. It was fabulous.”

But in 2009 the family six decided to move to Spain. “We always wanted the kids to have a second language, so we flew over there on a whim.

“It was a bit crazy, to be honest. We ended up renting an apartment with no furniture in it. When we landed we had to go to the furniture store. But everything just fell into place. We just clicked with the place and fell in love with the lifestyle and the people.”

The move was tough for the boys at first. “The first six months in school were the hardest, but suddenly they got the language and now you wouldn’t even tell they were Irish.”

Stack got a job teaching English conversation at the Montealto School in Madrid in 2010, which she still continues. It piqued an interest in education, and in 2015 she went on to form life-coaching enterprise Think Communicate Lead, which helps increase success at school, at work and in personal life.

“We help increase self-awareness, set and pursue meaningful goals and develop positive personal qualities such as self-esteem, a positive attitude, self-discipline and self-motivation.

“I also had a fifth child in between – a daughter, who is more Spanish than Irish.”

Things were going well, until 2020 came along. “My husband was working in Ireland, so when the lockdown occurred in March, I was alone with five children in an apartment, trying to work and home-school with bad internet.

“It was pretty intense. Our only highlight each day was clapping at 8pm for the health workers on the balcony.”

Stack and her family had to stay indoors for six weeks as Madrid was hit hard by Covid-19.

“My two youngest didn’t leave the apartment during that time. I’d go shopping every two weeks and not touch certain shopping bags. We’d have to ration everything. Because there was no traffic, you’d just hear all the sirens and see people getting stretchered out of buildings by people in hazmat suits. It was beyond belief. I was terrified I’d get sick and no one could look after the kids.”

Once lockdown ended things went back to normal, but Stack fears they aren’t out of the woods. “I still haven’t bought the kids’ uniforms just in case they don’t go back.”

Stack, who is a director at her husband’s company OpticalRooms, an optical testing company based in Ireland, says she is working on reducing digital exposure.

“So many of us – especially children – are spending more time in front of screens for the purposes of home-schooling and entertainment so we offer tips on how to find better home working solutions.”

Despite the pending winter of uncertainty, she and her family are happy in Spain. “Even though we endured the worst of a pandemic, we still love it here, and have chosen to stay, despite the odds. It’s just such a great place to live and we are prepared for whatever comes next.”