‘You have a great life in France – the weather, the food, the pace of life’ 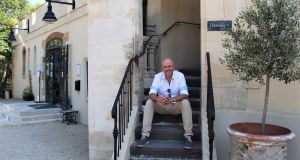 Dubliner Karl O’Hanlon who runs three French châteaux: ‘My son works in the kitchen, my wife runs the kids’ camp and gardens. It’s very much a family affair.’

Most people dream of restoring a tumbledown French château to its former glory, but Dubliner Karl O’Hanlon and his family made the dream a reality with not one, but three self-catering properties in Languedoc.

O’Hanlon began his career not in interior design or gastronomy, rather with a politics and philosophy degree from UCD, where he met his wife Anita and now business partner.

“We first left Ireland in 1993 to live in Oxford, where I completed a masters in European politics and society focusing on modern Irish economics.”

After finishing their respective post-graduate degrees, the couple moved to London, where O’Hanlon worked as a management consultant with the Boston Consulting Group in Mayfair. “We had our first daughter while we were living in the UK, but moved back to Ireland in 2001, just in time for the Celtic Tiger.”

The family had two more children and bought a house in Portobello. “It was a great time to be in Dublin. There was a great energy around the place. The kids were young, the grandparents were around the corner.” O’Hanlon got a job with Bank of Ireland and worked in consultancy roles covering technology, strategy, and e-business.

“I enjoyed it, but I also had a lingering interest in design. I loved the idea of creating and making things. I’ve always been tantalised by old and abandoned buildings and the notion of doing places up.”

So he scratched his creative urge and studied interior design at the Dublin Institute of Design and worked on projects in Languedoc at the Mediterranean coast, close to the Pyrenees, which he had known since childhood.

“My father was a wine journalist, so we had connections in the south of France. I started to dig a little deeper and look at wineries in the region. Many had become derelict as wine making had moved on.”

After initially working in consultancy, he founded property development business, Domaine & Demeure. The first project he raised money for was the run-down 19th century Château les Carrasses near Narbonne, not far from Carcassonne. “It was a huge job but that’s what makes it fun.

“We wanted to create something different. When we holidayed with the kids, we found that the accommodation often lacked options. You’d have self-catering with no amenities or hotels with no kids’ clubs. We wanted to offer the best of both – with fully equipped self-catering apartments with barbecues and private pools, but with top-class restaurants, kids’ clubs and amenities, all in stylish surroundings, a winery and top-class service.”

So in 2011, when the luxury residence opened its doors, rooms and apartments were sold out immediately. “We were inundated. Obviously many other people had the same desires as we did.”

From the offset the Dubliner’s plan was to split the château into separate holiday apartments with the idea of selling off the units and offering a property management service, so people can own an old property in France, without the hassle of bureaucracy and dilapidation. “But we offer more than that. You can just come and eat at the restaurant, or book a room for the night. We have an array of options.”

The next project was the Château St Pierre de Serjac, which opened in March 2016, another magnificent château estate with a vineyard, hotel, spa, free bikes, tennis courts, restaurant and self-catering properties, set in the stunning Mediterranean Languedoc town of Puissalicon.

“You have to kiss a lot of frogs to find your princess. You have to look at a hundred to find the right one. Then you need to work out whether or not the project will work. You need to figure out, can I get water in? Can I get electricity in? Can I put a finance deal together that works?

“Then you start on the development properly, the planning.” His finance background helped but there are many variables at play, including language barriers, he adds.

“France has a bad reputation for bureaucracy. Corporate tax is relatively high and there’s quite a lot of tax on inputs such as social security tax on the payroll. On the other hand, once you follow the planning process in France, you will eventually get there.”

He advises people moving to France to have someone with local knowledge to help out. “Key to our success has always been to have local involvement, not just for the build and payroll, but also as guests. Locals eat and love the restaurants year round at the châteaus too. They aren’t just closed off to transient foreign families.”

The family, who settled within half an hour from their châteaus are integrated with the community there. “Our kids are bilingual and have much better French than we do,” he laughs.

“My son works in the kitchen, my wife runs the kids’ camp and gardens. It’s very much a family affair. We have 100 people working with us. I now focus on the overall management, so there’s always something to do.”

Luckily the châteaux enjoyed a busy summer since reopening after coronavirus-induced lockdowns. “The private facilities, with the option of restaurant take-outs and top amenities offer a lot of space and privacy, which is Covid friendly. We’ve had mostly self-drive guests from mainland Europe, Belgium, Holland, France of course. We’ve missed the Irish this year, so hopefully they will come soon.”

O’Hanlon hasn’t taken his foot off the gas at all, also offering an online shopping service. “So many people were asking us about our furnishings, which are sourced in Ireland, Indonesia and France, so we decided to create a website, so they can order things themselves called domainelife.com.”

The family are also preparing for the opening of their third château- Château Capitoul, a winery near Narbonne in the heart of Languedoc.”

“Things were delayed because of the coronavirus, but we hope to open in March. It’s a stunning estate. Besides becoming a self-catering property, it will also offer iconic holiday homes, a restored winery, gardens, restaurants, infinity pool, lots of options for families and more.”

No two days are the same for O’Hanlon, but the pace of life is slow and relaxing, which makes the tasks in hand easier.

He says, Irish people are very welcome in France. “The French don’t make any concessions either, but it’s an equal opportunities society. Kids love it here. But they do go home regularly. My daughter is in boarding school in Ireland, so they get the best of both worlds.”

“The school system here is great and flexible. If you move here mid year, don’t worry about it, they will take you and kids pick up the language quicker than you think.

“We told the kids what we had a three-year plan when we moved over in 2006, but we haven’t had any calls to move back home. You have a great life in France – the weather, the food, the pace of life, the pragmatic French attitude – so we’re happy we didn’t stick to it. Life is good in France.”