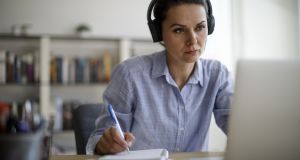 Without the right and ability to disconnect, working from home can feel like living at work. Photograph: iStock

The Government’s strategy on remote working is more aspirational than revolutionary, though it has the potential to become the latter.

Anyone denied access to jobs they could easily perform from home or at a location remote from their employer’s premises will be happy to see it on the agenda. A culture shift that genuinely gives employees more choice and control over when and especially where they work – or puts the onus on employers to explain why these things cannot be done, at least – is a much overdue culture shift.

If the legislation helps create a more inclusive labour force – rather than, say, ghettoising categories of workers into unseen kitchens or spare bedrooms whether they like it or not – then the benefit will be to society as a whole.

Tánaiste and Minister for Enterprise Leo Varadkar believes the predicted post-pandemic rise of hybrid working – a mix of office and remote working that many say they prefer – will, on balance, bring changes for the better. He is probably right.

But, as he also observes, there are risks too: a loss of face-to-face creativity, the fading vibrancy of city centres, isolation.

Notwithstanding the broad welcoming of the strategy by business groups, they, and others, will soon be picking over the nitty-gritty. One key area of contention is sure to revolve around the mooted introduction of a code of practice for the right to disconnect.

While a formal division between the beginning and end of the working day, demarcated by the arrival and departure from the physical workplace, can be restricting and exclusionary, it more often allows for the switch-off time that is so vital for the simple enjoyment of life – or it used to anyway.

Younger generations whose working lives have entirely taken place in the age of smartphones have been encouraged to accept that it is normal for employers to contact them whenever they feel like it. The consequences of not being “always on” may go unsaid, but that won’t mean there aren’t any.

This reality, part and parcel of the erosion of nine-to-five conventions, was troubling office-based employees long before Covid-19. Last year’s abrupt, mass-scale decamping to home offices blurred the fuzzy lines further. The revolution has indeed already happened, yet the freedom promised by technology remains hideously elusive. For many, living at work has become the unpalatable corollary to working from home.

In this context, asking the Workplace Relations Commission to draw up a code of practice, one that can be referred to in disputes and adjudications, seems like the least the Government can do to protect workers when employers do not.