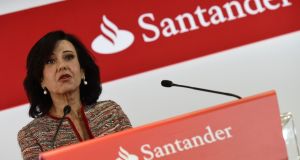 Santander’s president Ana Botín. She says there needs to be a longer-term rethink on how risks attached to loans are assessed. Photograph: AFP/Javier Soriano/Getty

Ana Botín, one of the world’s most powerful women in banking as executive chairman of Spain’s Santander, seems to have been back at her desk sooner than most after the Christmas break, penning an opinion piece for Monday’s Financial Times calling for a rethink on banking regulation.

It was perhaps only a matter of time before bankers sought to use the Covid-19 shock to scale back the tide of oversight and legislation foisted on them since the financial crisis.

The fact that we have not seen banks implode in the past 10 months has probably been down to the increased oversight and levels of rainy-day capital that banks have been forced to build up over the past decade or so. But some of Botín’s points are worth considering if we want a financial system that’s fit for purpose.

While regulators globally have temporarily eased banks’ capital requirements in an effort to keep them lending through the pandemic, the scion of a Spanish banking dynasty (whose full name has O’Shea tagged at the end, thanks to Irish ancestry) says that uncertainty over when banks must rebuild these buffers is putting pressure on them to keep a grip on capital. Regulators would help if they provided some clarity, she argues.

Botín also says that there needs to be a longer-term rethink on how risks attached to loans are assessed – which has a direct effect on capital demands.

In Ireland borrowers are less likely to run into trouble during the pandemic than the boom-time mortgages during the last crisis with higher interest rates.

Banks must hold 2½ times more capital against mortgages than the European average.

The rules do not allow for a differentiation for the fact that a third of Irish home loans have been issued under some of the strictest lending limits in Europe.

Meanwhile, Botín also calls for regulators to consider how to reduce the cost of capital for banks that finance green activities, and for a levelling of the playing field between banks and disruptive fintech groups that are venturing into lending while being subject to far less regulation.

History has taught us to be wary of bankers calling for less red tape. That said, Botín’s input should not be dismissed out of hand.