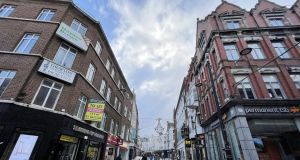 It’s debatable whether GDP is relevant any more in an Irish context. Photograph: Tom Honan

The globalised nature of the Irish economy makes it volatile and potentially more exposed to international trends, and increasingly difficult to track. When Covid first hit, most commentators forecast a recession of varying magnitude.

And technically we did fall into recession in the second quarter after posting back-to-back quarters of GDP contractions. But a strong rebound in quarter three – GDP grew by 11 per cent quarter on quarter – on the back of a resurgence in consumer spending and strong exports means we’re not in recession any more and we’re likely to record positive growth for 2020 as a whole, one of only a few countries in the world to do so.

This is something of an odd notion for those living and working through one of the most challenging economic periods in Irish history. It’s probably a slap in the face for those who have lost their jobs and whose businesses are failing in the face of crippling restrictions.

It’s debatable whether GDP is relevant any more in an Irish context. It was created when economies measured their respective wellbeing in terms of tangible goods like coal and steel, and jobs created. In an increasingly digitalised world predicated on intangible innovations spread across complex supply chains, GDP has become an outmoded concept.

It suggests that the Irish economy grew in annualised terms by 3.7 per cent in the third quarter 2020. This is crazy in the context of a severe lockdown in the second quarter and an unemployment rate that rocketed to 28 per cent in April.

If we look at modified domestic demand, an indicator that removes globalised elements like multinational profit flows and intangible asset transfers,we get an entirely different picture. This gauge suggests the economy here contracted by 6.3 per cent year on year in the third quarter.

It’s likely we’ll see a similar disparity in the year-end figures but that won’t stop us heralding Ireland as one of the fastest growing, most productive economies on the planet. Unfortunately, the real picture is less appealing and a lot more complex.