Pilita Clark: Too many boardrooms are climate incompetent 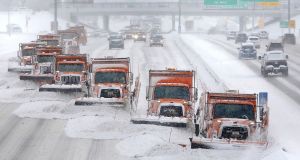 Wisconsin snow storm. When researchers combed through the biographies of 1,188 board members at the 100 largest US companies, they found just three directors had specific climate expertise. Photograph: John Hart/Wisconsin State Journal via AP

Not that long ago, I found myself on a video call with a group of business people where a man who once ran a very large company said something unexpected.

He revealed a survey of boardrooms he had been involved with had found that just 7 per cent of board members were “climate competent”, meaning they knew enough about climate change to understand how it could affect their business.

There were audible gasps when he said this, but there should have been no surprise. The dearth of boardroom climate expertise is actually worse in some places, according to a new study from New York University’s Stern Center for Sustainable Business.

When its researchers combed through the biographies of 1,188 board members at the 100 largest US companies, guess how many directors they found had specific climate expertise? Three. That’s 0.2 per cent of the total, just 6 per cent of whom had broader environmental experience.

At a time of ballooning investor demand for climate action, these numbers highlight the stark gap between what companies are saying about cutting carbon emissions and what they are actually doing.

What is being said is striking. Since the start of 2020, the number of the largest companies with a net-zero emissions target has tripled to at least 1,500. Yet too few firms have a detailed plan for reaching those targets, which is no surprise considering the state of boardroom climate competence.

This might not matter if global warming was no problem for companies. Yet global executives themselves rank climate change the most serious societal threat to their business over the next decade, a recent Deloitte report says – despite a pandemic widely expected to push such concerns to the background.

As BlackRock’s Larry Fink said last week: “In March, the conventional wisdom was the crisis would divert attention from climate. But just the opposite took place, and the reallocation of capital accelerated even faster than I anticipated.”

Investors in mutual funds and exchange traded funds poured $288 billion into sustainable assets between January and November last year, he said, nearly double the sum for all of 2019.

That’s smallish beer in a global investment market worth trillions and BlackRock itself has been slow to match its words with action on climate change. But Mr Fink is correct to say “there is no company whose business model won’t be profoundly affected by the transition to a net zero economy”.

That’s one reason why I doubt today’s woeful levels of boardroom climate illiteracy will last.

The NYU study on boardroom expertise was based on directors’ 2018 biographies and lead author, Prof Tensie Whelan, told me last week she had seen no sign of significant change since then. But she was hopeful nonetheless, in part because of what is happening at groups such as ExxonMobil.

Last week it emerged the oil group was considering board changes after talks with activist investors who say a refresh is needed to put the company on a more sustainable financial footing.

Covid has reversed years of gains in the war on poverty and the pandemic is far from over. That is one reason why consumer goods group Unilever just announced a new type of target: by 2030, it says it will only deal with suppliers who pay a living wage or income.

“On climate change, the tipping point has arrived,” says Leena Nair, Unilever’s chief human resources officer. Companies know they have to act. But Covid had made the gap between rich and poor too big to ignore, she adds. “We need more and more businesses to make commitments.”

I think she’s right. But a lot of those businesses will also need a board that knows what sort of action to take. – Copyright The Financial Times Limited 2021