Raising minimum wage in 2018 had only ‘short-lived’ impact 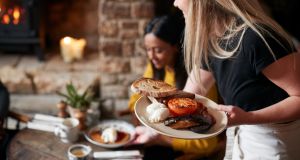 The fall in hours was not felt by those working in hotels and the food industry, where a third of workers are on the minimum wage – the highest percentages of employees. Photograph: iStock

Employers’ fears that the Government’s decision to raise the minimum wage last year would lead to job losses did not materialise, according to a study by the Economic and Social Research Institute.

The ESRI examination of the decision to raise the State’s minimum wage from €9.25 to €9.55 an hour in January 2018 found it led to a short-term reduction in the number of hours worked.

However, the impact was “short-lived” – lasting just six months – as demand for labour in the Republic’s fast-growing economy outstripped concern over the wage hike.

By June 2018, the average hours worked by the one-in-12 workers in the State earning the minimum wage fell by 1.6 hours a week in Dublin and 1.7 hours a week in the west.

The fall in hours was felt mostly by manufacturing workers, the study found. However, it was not felt by those working in hotels and the food industry, where a third of workers are on the minimum wage – the highest percentages of employees.

The report said the drop in hours in Dublin and the west, along with the manufacturing sector nationally, tapered off in the second half of 2018, indicating that the decline in hours worked was temporary.

Some employers argue that minimum wage increases damage employment and the wages of those it is meant to improve. A previous ESRI study found that a 2016 pay rise did significantly affect earnings for minimum wage earners.

“It is important to recognise that minimum wage changes can affect particular areas of the labour market differently and studies focusing only on national data risk missing important impacts,” said Prof Seamus McGuinness, lead author of the ESRI report.

“While in this instance we found that any regional and sectoral changes were short-lived, it is important that we continue to monitor this, as impacts could become more persistent during periods of lower economic growth,” Prof McGuinness said.

Meanwhile, workers will in future have a legal right to receive “on a fair, transparent and equitable basis” tips and gratuities paid electronically by customers using debit and credit cards.

Announcing the decision, Minister for Employment Affairs Regina Doherty said she had received approval to expand the scope of a planned update of legislation governing the payment of wages.

Last July, the Minister said that new legislation to amend the existing Payment of Wages Act to ensure that tips and gratuities could not be used to “make up” or satisfy a person’s contractual wages.

She said the legislation would provide “for a requirement on employers to clearly display, for the benefit of workers and customers, their policy on how tips, gratuities and service charges are distributed”.

Now, employers will be obliged to distribute electronically-gifted tips to workers under the legislation, which the Government had decided should be progressed as quickly as possible, she said.

An Opposition Private Member’s Bill currently before the Oireachtas will continue to be opposed by the Government, which argues that is “fundamentally flawed and will not achieve any real advantage for workers,” she said.