This world is just not designed for women

Andrew Hill: ‘Pink it, shrink it and make it a bit crap’ 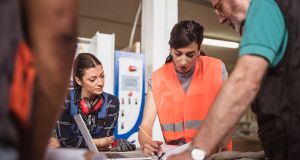 “Collect data for women, figure out what our needs are . . . and design for that.”

Minutes after Caroline Criado Perez won the Business Book of the Year Award last week for Invisible Women, I had to interview her for a short video.

I am taller than Ms Criado Perez. To avoid a “little and large” effect, the producer suggested finding something for the author and activist to stand on. Given that her book is all about how women are forced to adapt to a default based on male norms, humiliating our prize-winner seemed a bad idea.

Instead, I stood with legs uncomfortably wide apart to bring my height down by a couple of inches. Manspreading, but in a good cause.

Admittedly, this is a far from perfect example of the embedded bias that Ms Criado Perez attacks so successfully. I have interviewed plenty of male book-prize winners who are shorter than I am. It is also trivial compared with some of her examples. Invisible Women lays out in cool, data-backed detail how more women die as a result of using default male crash test dummies for cars or succumb to heart attack, because tests, technology and research have in the past skewed towards men.

Failure to provide adequately tailored personal protective equipment, from stab-vests to spacesuits, also exposes women to risk. The suggestion that there is a gap in the market here is a reminder of the quite literal gap between female body and ill-fitting armour, through which a blade could slip. Like fish unaware of the water they swim in, most men fail to notice such problems until they are pointed out.

One straightforward message Ms Criado Perez wants to amplify is the need for data to be disaggregated by sex so studies do not carelessly assume that results gleaned for “people” are always valid for both sexes.

This will take time. In occupational health, for instance, the long term consequences for women who have to lift heavy loads or handle noxious chemicals (as cleaners, say) are still under-researched.

When she sat down with me the day after the book award for a longer interview, she told me: “If we started now it would take about a decade before we had enough usable data . . . We’re still in the period of women having to die.”

If Invisible Women has shocked unaware men, it has deeply angered many women. Ms Criado Perez is angry, too. But she strikes a positive, upbeat tone. This work, so persuasively argued and backed by reams of research she has collected, has not generated the same misogynist backlash that her high-profile campaign to put a woman back on to British banknotes did.

“I’ve never had any pushback from people who’ve read the book,” she says. “There’s not much you can do with people who refuse to read the argument before dismissing it.”

As one of the book award panellists, Herminia Ibarra from London Business School, put it during the judging meeting, “Getting people to read and discuss a chapter from this book would be way more powerful than any tick-the-box diversity exercise”.

Companies are gradually leaving behind the out-and-out disasters that have entered the annals of bad design decisions. The “Bic for Her” debacle in which the biromaker attempted to design a pen for women only – a classic case of what Ms Criado Perez calls the “pink it, shrink it and make it a bit crap” approach to female-friendly design – dates from 2006. Apple’s failure to include a period tracker in the first release of its supposedly comprehensive Health app was 2014.

Yet many companies are still not addressing an obvious opportunity. Ms Criado Perez says the message for business is that, “The population is made up of 51 per cent women, 49 per cent men, and it doesn’t make sense from a justice perspective, a business perspective, or a financial perspective to be ignoring literally half of the world when you’re trying to create services and products that the whole world is going to want.”

There is some movement. Ms Criado Perez cannot name them, but she says some big companies have approached her to advise them on products. Her counsel is simple enough: “Collect data for women, figure out what our needs are . . . and design for that.”

She says it would help fix the issue if companies appointed gender-balanced teams, and if venture capital did not continue to dismiss as “niche” products designed for women, often by female entrepreneurs.

I am perplexed that decades of consumer goods companies’ work on focus groups, product testing and field observations have not opened up these opportunities already.

Ms Criado Perez points out that if the very design of the questionnaires and studies that are used is faulty, the outcome will be, too. It is evidence of companies’ failure to make sure the right mix of people is in the room when the research itself is designed. More profoundly, it is a “failure of imagination”. – Copyright The Financial Times Limited 2019

1 Little strategic thinking in election manifestos of Fine Gael and Fianna Fáil
2 Opioid executive admits to ‘no morals’ ahead of prison term
3 EU banking watchdog describes rejection of Cross nomination as ‘unfortunate’
4 Cathay Pacific to resume Dublin-Hong Kong flights in March
5 Who are Ireland’s 17 billionaires?
6 My father in a nursing home wants to gift me his house
7 CPL founders Anne Heraty and Paul Carroll in line for €1m dividend payout
8 Are there annual limits on inheritances or gifts to a child?
9 Ryanair wants Irish courts to block Skyscanner from selling its flights
10 Q&A: Why has the pension age question suddenly become an election issue?
Real news has value SUBSCRIBE