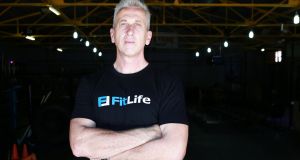 John McGrath in Cape Town: “You can be what you want to be here.”

Cape Town, on South Africa’s southwest coast, is a “glorious” place and rather than dream about living there, “strongman” John McGrath moved to the city in 2009 after the Irish economy and, subsequently, his life collapsed.

“I owned a gym in Waterford and was training hurling players among others. I had invested all my savings in property. Life was good. Then the recession came,” he says.

“One of the first things people cancel when things get bad financially is their gym membership. On top of that, all the properties I had invested in lost their value by half. Like most Irish people I was in negative equity and eventually lost everything.”

But rather than look back with bitterness and anger, McGrath is philosophical. “It made me leave Ireland and start a new life here so, in a weird sense, it was probably the best thing that could have happened.”

He says he came to the southern hemisphere to seek something different and the life that opened up was “phenomenal”.

Since arriving in South Africa, McGrath has tapped into his smorgasbord of sporting achievements and has become a gym owner, rugby coach, mentor, corporate speaker and more.

Originally from Lismore, Co Waterford, McGrath started rowing at the age of 13 and ended up on the Irish team, winning the International Open Championships gold in Belgium and a sports scholarship from the Waterford Institute of Technology.

His rowing career came to an abrupt end when he suffered a back injury during a race aged 24. But McGrath had no intention on giving up on sport. He took up martial arts and earned five black belts. He was trained in Hapkido by Bruce Lee’s coach DoJuNim in New York, and learned the art of Kombatan in the Philippines before his fascination with old-time strongmen took his career on yet another path.

“Strongman skills require huge amounts of discipline and training so I can do things like tear up phone books or break chains with my breath.”

Now he uses these strongman skills to inspire young people in the townships around Cape Town. “I give motivational speeches to kids and gang members and show them how I bend nails and break out of handcuffs. I grew up with no running water or electricity, so it’s important for them to know that you can rise above any difficult situation and become something if you apply mental strength.”

McGrath says the concept of maintaining peak physical performance is the ultimate metaphor for changing your life. “Forging martial arts with strongmen principles is a unique but effective way to live and I use it to train local athletes to achieve peak performance,” he says.

One of these athletes, Luvo Manyonga, has gone on to great things. McGrath had heard about his rare talent and tracked him down in a township in 2013. Manyonga, a former crystal meth addict, had been banned by the sports governing body at the time. His coach had died and his life was in turmoil.

“When I met Luvo for the first time, he was in poor condition – his lips blue-grey, his body malnourished and weak and in his heaviest state of addiction. What Luvo needed was a friend and then someone to believe and share in his dreams.”

They did lots of mental and physical strength training and he overcame his demons and dysfunctions to qualify for the Olympic Games in Rio, against all the odds,” he says. He won silver and went on to become world champion at the 2017 World Championships in London.

McGrath has since been working with long-jump and pole-vaulting protégés who he sees as potential Olympians.

“I keep my ear to the ground, do a lot of nurturing. It’s never straightforward, but I want to help people want to succeed, if that’s what they really want to do. This area boasts some of the finest long jumpers in the world and there is so much potential.”

McGrath has taken his training and motivation to the corporate world as well and addressed 700 GAA coaches at a coaching seminar in Croke Park last month.

“I believe the same foundational principles of high performance as an athlete or team apply to business excellence.”

In the coming year, McGrath is going to be the subject of a documentary for Irish television and he is writing a book. “I’m also hoping in the future to do more corporate training and motivational conferences and speeches around Ireland and Europe.

“The funny thing for me is that, by leaving Ireland, my career has opened up there now and people are starting to know me back home,” he says.

And as for anyone thinking of coming to Cape Town, he says: “Do it. You can be what you want to be here. You can find your own tribe.”

But there are difficulties too, he adds. “The visa requirements are tough, so you need to get an employer to take you on. Its not as cheap as people think and salaries are low.”

Also there are socioeconomic problems here and life can be up and down like it is anywhere else. But there’s a lot of space and people are open to extraordinary things; and if you take the risk you can achieve a lot.”