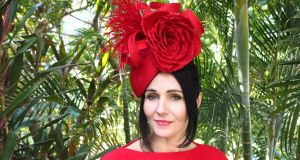 Noeleen Armstrong Kish from Dublin wearing on of her creations

One of the highlights of the extensive horseracing calendar in Hong Kong is the Sasa Ladies Purse Day at the Shatin racecourse, when the city’s great and good dress up for the day.

It’s also the biggest hat-wearing event in Hong Kong, and last year the lead milliner was Noeleen Armstrong Kish from Dublin, who designs and makes the hats using traditional millinery methods at her studio in Kowloon Bay. Her brand is called Noeleen.

Armstrong Kish has fond memories of growing up in Ireland, particularly her grandmother’s stall on Moore Street, but she left soon after she finished school.

“I always remember the amazing colours and varieties of flowers in the market. I have eight brothers and sisters, and space was tight at home.

After finishing school, I had an opportunity to work in the world’s third largest flower auction south of Rotterdam in the Netherlands so I packed my suitcase and began my journeys abroad,” she said.

By the turn of the century, she found herself in Western Australia, working for a South African shipping company in Fremantle. It was in Australia that she made her first hat in 2000, and wore it to racing events where she started getting compliments on the designs.

Five years later she came to Hong Kong with a group of clients for the Rugby Sevens tournament and joined the shipping giant Maersk.

“I fell in love with the city at once and applied for a job here with my company. I was a single girl and didn’t know a soul here. It was a brave decision but I’m glad I took the risk,” she said.

She moved to Maryland for four years from 2009, where she took millinery courses and establishing her business, then moved back to Hong Kong in 2013.

The hats are a big hit, but Hong Kong is a famously demanding market.

Some of her clients were familiar with the London-based Irish milliner Philip Treacy but she very much had to build up the business herself.

Each hat is individually crafted, using wooden hat moulds imported from England and Australia. She sews everything by hand, and they cost between €300 and €950. Over the years, she has also taken her hats to racing events in Dubai and Ascot.

“Being in Hong Kong, people expect bespoke items very quickly. They love the hats and my designs but want them in one or two days. I need to change expectations, explaining and showing them that the design time, hand moulding and handcrafting can sometimes take much longer.

In the end, the clients love the entire experience; from seeing how the pieces are made from scratch in my work studio to how they feel when they see their finished product in my signature hat-box packaging,” she said.

The territory’s reputation as a place to do business is well earned, she said. And, for Irish people, the new direct flight on Cathay Pacific from Dublin to Hong Kong is a great addition.

“Each and every year, Hong Kong is voted as one of the most business friendly cities in the world. The government has found a good balance between necessary regulation and unnecessary bureaucratic controls. I find it wonderful place to do business because everything I need is at right at my fingertips. The networking environment is fantastic and people are always willing to help,” she said.

She has no hesitation in recommending Hong Kong and China as an option for young job seekers.

“Hong Kong is a fantastic place to work and live. Be prepared to live in a small flat, as rents are very high. There are lots of opportunities in the logistics, sourcing, and financial services.

“Enjoy the great hikes and country parks Hong Kong has to offer. It’s not all glass and concrete. Lastly, the infrastructure and public transport is second to none, so don’t feel obligated to live close to work,” she said.

“Hong Kong has a strong entrepreneurial spirit and an incredibly strong work ethic. The government encourages risk-takers through their simple and fair flat tax. In addition, the government regulatory and administration processes are very simple and efficient,” she said.

She misses the clean air of home, and the fact that Ireland has a much richer history in horse racing and hat wearing occasions.

“It’s one of my missions to help bring hat wearing culture to Hong Kong and Asia. In addition, I’d love to see Tayto Crisps, white pudding, and Irish sausages offered in the supermarkets over here,” she said.