Caring for the carers: Looking after the wellbeing of frontline workers 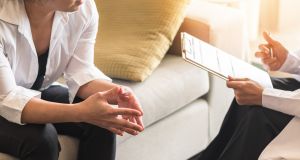 Working Well encourages employees to look out for each other and to pay more than lip service to asking someone if they are OK. Photograph: iStock

Cara Driscoll is an organisational psychologist at the Oberstown Children Detention Campus. It caters for young people up to the age of 18 who have been remanded there by the courts. At any one time, there are around 40 children in residence. Oberstown has 270 staff and roughly 160 of them are in front-line roles.

Unusually, Cara Driscoll’s focus is not the children, it’s her colleagues. She is responsible for looking after their wellbeing in what can often be a very challenging working environment.

“Staff at Oberstown face emotionally difficult and stressful situations, including challenging and self-harm behaviour. They may be exposed to critical incidents, which can lead to hypervigilance, not to mention working in an institution that is under constant media scrutiny,” Driscoll says.

She has developed a programme called Working Well to address the specific needs at Oberstown. A key aspect of this is a collaborative approach to caring for the carers, particularly in the area of mental health. In a nutshell it encourages employees to look out for each other and to pay more than lip service to asking someone if they are OK.

The initiative is backed by a team of peer support workers trained in mental health first aid and are available to those experiencing distress.

“We’ve gone through significant change at Oberstown on a number of levels and it’s well documented that people find any change stressful. But when it’s major change, that can stretch them even further,” Driscoll says. “We recognised that, in order to deliver high-quality care to young people, all staff, not just those on the front line, needed to be looked after. That was the driving force behind the development of our wellbeing framework.

“At a practical level, this involved the appointment of a health and safety officer, the development of risk assessments, specific critical incident training and an on-site campus support service that would complement existing external employee assistance programme. From this emerged the idea of putting a more formal peer support structure in place, so we trained 35 volunteers and they are the ‘go to’ people if someone needs assistance.”

Driscoll says it is very often co-workers who spot that a colleague may be experiencing some sort of a mental health issue even before they do themselves.

“Any change in baseline behaviour is often the first sign: has someone become withdrawn, moody, stopped going for lunch with people, become more irritable, shown signs of anxiety, or is not performing as well as they normally do. Not eating well and not sleeping well are also warning signs,” she says.

“What’s really key with any workplace programme is that the buy in starts at leadership level. There’s no point talking about work-life balance if people are being stressed out by being sent emails at midnight or expected to take routine calls outside of working hours.”

Driscoll also says that, if things go wrong at work, there should be a mechanism to allow people to reflect after the event to avoid bottling things up.

“At the time of an incident, it’s all happening and there’s no time to pause. But afterwards, it’s really good to explore the incident in itself, not to attribute blame in any way, but to give people the opportunity to say how it was for them and to look at what went well and what didn’t go so well. Treat it as a learning opportunity. It’s part of how you build a resilient culture within an organisation,” she says.

In 2018, an OECD report estimated that mental health problems are costing the Irish economy €8.2 billion a year. It also found Ireland has one of the highest rates of mental illness in Europe, ranking joint third out of the 36 counties surveyed.

Some 18.5 per cent of the Irish population was recorded as having a mental health disorder, such as anxiety, bipolar, schizophrenia, depression, or alcohol or drug use. The report estimated total costs related to mental ill-health at more than 4 per cent of GDP – or over €600 billion – across the 28 EU States with mental health problems affecting an estimated 84 million people.

Dr David Morris is a former frontline emergency medicine practitioner who is now head of wellness at the VHI. “Front-line staff need to be looked after in a special way and one of the keys to this is training so that when something bad happens people are prepared,” he says.

“Sports people and those working in high-performance environments are very tuned into this idea of preparation and recovery and this is something we need to be applying in the workplace.”

Morris too emphasises that programmes to support employee wellbeing and mental health should be more than “nice to have”. He says organisations must live by them if employees are going to take them seriously and that the only way to ensure that this happens is if they are driven from the top down.

Signs of a possible deterioration in a colleague’s mental health.

Lack of motivation and difficulty concentrating.

Loss of sense of humour.